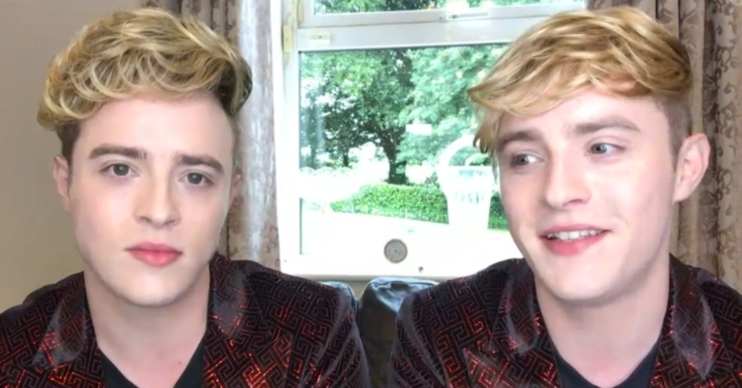 John and Edward have a new album

Brothers John and Edward Grimes appeared on the show to promote their new album Voice of a Rebel.

Speaking to host Christine Lampard, John said: “There are a lot of serious songs on our album.”

Edward added: “We recorded the music videos in Los Angeles and decided to be the directors for our own videos because we made four.”

Their first single from the new album is called Taste the Heat – and it’s out now.

Next month, the boys are planning to drop another single.

In addition, Jedward had planned to tour the UK later this year but unfortunately, it’s been postponed due to COVID.

John said: “The thing with music is that all live concerts have been cancelled so we have to reschedule our tour for 2021.

“That will be the year we get to see everyone on the road.

“We love travelling around the UK because there are so many quirky places where we get to stop along the way and get a snack or a cup of tea.”

Edward and John are currently quarantining at home in Dublin.

The boys had been staying in LA with their Celebrity Big Brother friend Tara Reid.

Now they’re back home, they’re trying to spend their time productively while self-isolating.

“It’s a weird situation to try and adapt to.

“We try and stay active and go out for walks. Some days you feel a little bit low and sometimes you feel healthy and other days you’re online to see what everyone’s saying.’

After hearing the news that Jedward is back, delighted Lorraine fans were quick to react on Twitter.

One wrote: “Seeing @planetjedward on #lorraine this morning made my day a lot more better love seeing the on tv need to see more @ITV @lorraine.”

Another then added :Wow 22 songs on their album Voice of a Rebel. #lorraine. I cant actually wait for the music video for Extraordinary too #jedward.”

Unfortunately, not everyone was happy to see the return of Jedward.

One tweeted: “Just when you think 2020 couldn’t get any worse . F@$king Jedward announce a comeback.”

Another added: “Just when u think 2020 couldn’t get worse jedward are releasing music See-no-evil monkey they honestly haven’t changed they still act 12 and talk so much shit #lorraine.”

Then a third  wrote: “Just when you think 2020 couldn’t get any worse you learn about the return of Jedward.”

Although the twins are focusing on their music, they’re also looking to branch out into other sectors.

“I feel like being a household name, it’s good to move into he future because we can’t always just be these teen pop stars.”

The brothers explained that they hope to launch a talkshow similar to James Corden’s Late Late Show.

“We’ll b coming to the ITV studios soon,” teased John.