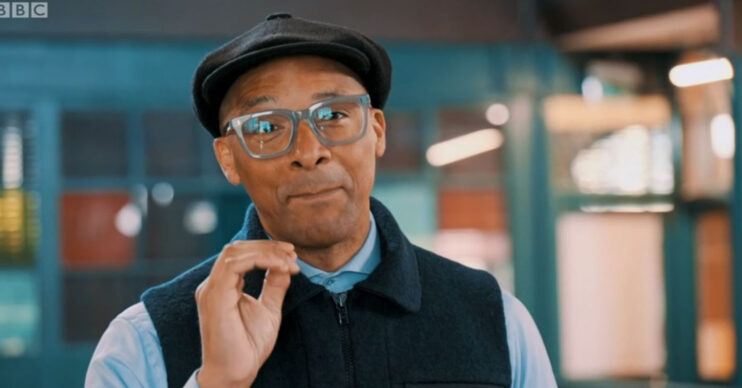 The presenter has a new craftwork series.

Jay Blades responded to a Yorkshire Workshop fan who joked his emotional new show should “come with a warning”.

Jay is best known for his role as presenter of BBC’s The Repair Shop, but now he has a new show to add to his presenting CV.

The presenter has landed a new gig presenting Jay’s Yorkshire Workshop – a show which sees craft workers and three experts (Ciaran, Isabelle and Saf) create bespoke pieces of furniture to thank members of the public who have been nominated as local heroes.

After the first episode of the show aired yesterday (August 18), viewers took to social media to praise the emotional show which left some fans in tears.

Read more: Where is Jay Blades’ Yorkshire Workshop and who are his expert helpers Saf Fakir, Isabelle Moore and Ciaran O Braonain?

Taking to Twitter, Jay queried what viewers thought of the first episode, writing: “Wanted to know what you thought of our 1st show on @BBCTwo last night, please?”

One fan commented: “Really enjoyed it. It did make me cry but I will definitely be watching again.”

Similarly, another said they think it’s a show that “will bring me to tears every week!”

One viewer praised the show’s format, saying it was a “fab idea” to make gifts for “wonderful, deserving people”. It was also good “for trainee carpenters to learn the new skills needed and gain confidence in their own abilities”.

Adding to the praise, another commented: “Stumbled across Jay’s Yorkshire Workshop while I did my ironing. Man, that show should come with a warning. I was in bits by the end – sentimental woodwork, great stuff!”

To one fan who said they were “in bits” by the end of the episode, Jay responded “Sorry about that”, with a smiley emoji.

He’ll be the frontman of the six-episode series, which is set in Bradford.

Similar to The Repair Shop, the show works with members of the public who have amazing stories to craft them meaningful items.

The show will return next Wednesday (August 25th) to BBC Two at 9pm. You can catch-up on the first episode on BBC iPlayer.

Did you watch Jay’s Yorkshire Workshop? Leave us a comment on our Facebook page @EntertainmentDailyFix and let us know what you thought.