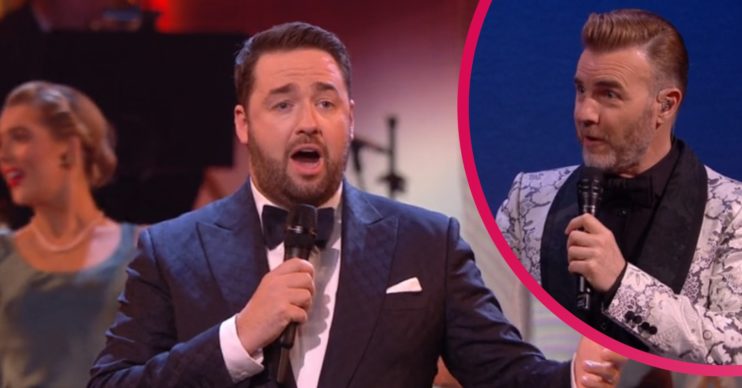 The comedian released his album in 2017

The Jason Manford album A Different Stage made a hilarious appearance on The Royal Variety Performance last night – after the comedian blew viewers away with his incredible voice.

As the programme got underway on Tuesday (December 8), the comedian started the show off by belting out the Andrew Lloyd Webber tune As If We Never Said Goodbye.

Why was the Jason Manford album A Different Stage on The Royal Variety Performance?

Gary Barlow then performed a song from his new album, Music Played By Humans, and afterwards he took part in a gag on stage that saw him exchange gifts with Jason.

Jason had bought him a copy of his own album, A Different Stage.

Gary said: “Oh, look at that… I didn’t even know you made albums.”

“Is it just the one?” Gary asked, laughing.

Jason quipped: “It’s just the one, it’s actually hard to come by if I’m honest, I had to go to every Poundland in the country.”

On Twitter, viewers couldn’t believe how good Jason’s voice was.

One said: “I think Jason Manford needs to sing more.”

Jason Manford is so talented, he can sing and he’s really funny.

A third pointed out: “People didn’t know Jason Manford could sing? So none of you watched The Masked Singer when he was in that?”

A fourth tweeted: “Jason Manford is so talented, he can sing and he’s really funny.”

“Jason Manford has a fabulous voice, the guy can really sing,” said a fifth, adding: “What a lovely opening to the show.”

Jason Manford is so talented, he can sing and he’s really funny…👏🏼😂#RoyalVarietyPerformance

#RoyalVarietyPerformance Jason Manford has a fabulous voice, the guy can really sing. What a lovely opening to the show.

The comedian released his first ever studio album, A Different Stage, in 2017.

The record was inspired by his love of musical theatre and features everything from show tunes he has performed to songs close to his heart. It also features a number of his childhood favourites.

Among the tracks are On The Street Where You Live from My Fair Lady and the Chitty Chitty Bang Bang song Hushabye Mountain.

What did you think of Jason Manford’s singing on The Royal Variety Performance? Leave us a comment on our Facebook page @EntertainmentDailyFix and let us know.