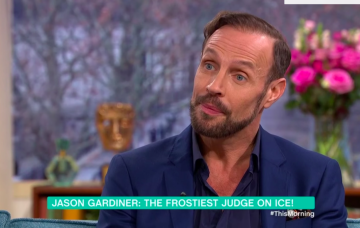 It followed Gemma's critical comments of the judge

There have been plenty of rumours about Gemma Collins causing trouble in the Dancing On Ice camp, and after a tense first weekend on the show, it looks like things are worse than ever.

After she publicly blasted Jason Gardiner, the judge has bitten back, calling the TOWIE star “ignorant.”

Gemma, 37, lashed out at the judge after his negative comments about her first skating performance on Sunday.

Jason called her dance a “French and Saunders parody” and she retaliated by saying his opinion didn’t matter since he “can’t actually skate, so he can’t back up his words with actions.”

In a new interview on This Morning, presenters Ruth Langsford and Eamonn Holmes questioned the controversial dancer about what-they-called his “harsh” critiques of contestants.

Focusing particularly on Gemma, Eamonn told Jason that “she bristled” during feedback.

The 59-year-old added: “I think it is going to be horns locked between you and her for as long as she lasts.”

Jason, 47, looked annoyed as Ruth read back Gemma’s comment about his skating skills.

He told the hosts: “We have to forgive these people for being ignorant and not knowing their stuff. Because, y’know, I guess [Gemma] doesn’t understand where I come from. She doesn’t know that I actually can skate.”

He added that Gemma could go ask his fellow judges – who include Jayne Torvill, Chris Dean and Ashley Banjo – if she didn’t believe it.

Jason explained: “They’ll tell her that I can actually skate. I’ve never professed to be a professional skater. I’m not on the panel to judge the skating. We leave that to skating royalty Jayne and Chris. Ashley and I have very clearly defined roles on the panel to talk about choreography.”

Ruth, 59, then asked him if he enjoyed being the show’s “pantomime villain” and he replied: “I enjoy the fact that I will say the truth.”

“Your truth,” Ruth said pointedly, as Jason argued that he’d been in the industry for 35 years.

Jason had previously warned fans he was going to be “honest” during his ITV appearance, tweeting on Friday morning: “I’m on @thismorning with mates @eammon @RuthieeL talking all things @dancingonice at 12:15. #honestjudge.”

And fans rushed to praise him for his comments after it aired, with one tweeting: “Love your honesty. Need a judge like you. Great interview as usual.”

Another said: “Just listening and I for one prefer to hear honest feedback. Certain dances were uncomfortable to watch and as stated it is a competition.”

A third added: “Love the honesty, if the Z list celebs don’t like to be critiqued they shouldn’t have signed up (desperate for the money or not), which bit of being in a competition don’t they understand.”

Read more: Louise Redknapp breaks silence on ‘heartbreaking’ injuries, which forced her to pull out of West End show

We can always trust Jason to be controversial.

What do you think of his comments? Leave us a comment on our Facebook page @EntertainmentDailyFix and let us know what you think.