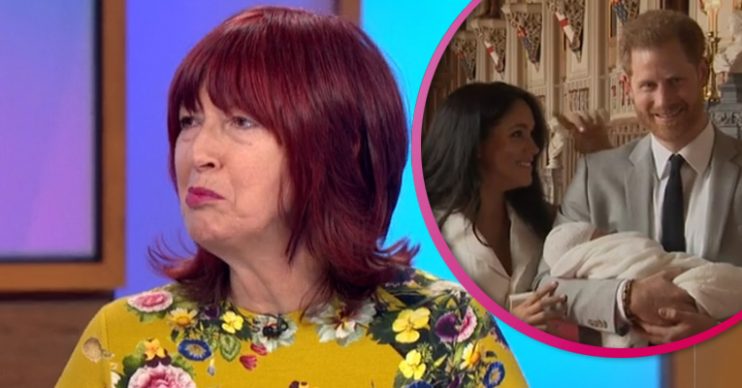 Janet Street Porter has poked fun at the Duke of Sussex for holding his newborn son “as if he’d given birth” as he and wife Meghan made their first appearance with their baby.

On Wednesday, Meghan and Harry proudly showed off their two-day-old beautiful baby boy to the press from inside St George’s Hall at Windsor Castle.

New dad Harry walked out holding the latest addition to the royal family alongside Meghan, who looked radiant in a white blazer dress.

During today’s Loose Women, Janet had a cheeky swipe at Harry as they watched the moment the royal couple introduced their first child to the world.

Janet said: “I noticed Harry held the baby as if he’d given birth.”

Her fellow panellists all had a tear in their eye as they gushed over Harry holding the tot.

Andrea McLean added: “The bit that made me well up was when the reporter said, ‘tell us about your son’. It makes the moment so entirely real.”

Earlier today, Meghan told reporters that her little boy was a “dream”.

Speaking about parenthood, she said: “It’s magical, pretty amazing. I mean I have the best two guys in the world. I’m really happy.”

Speaking about her baby son, Meghan added: “He has the sweetest temperament and he’s really calm and [has] been the dream. It’s been a special few days.”

What did you think of Harry holding his son? Let us know what you think by leaving a comment on our Facebook page @EntertainmentDailyFix!