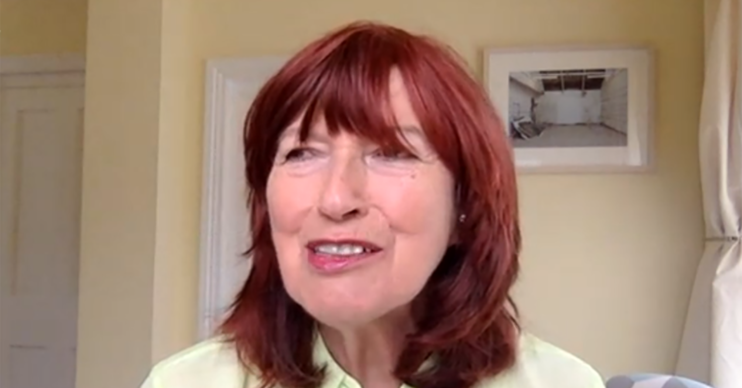 She got a bit carried away!

Janet Street Porter apologised to Loose Women viewers after making a comment about her dog.

On Wednesday’s show, the panel were discussing pets and how much they mean to them.

Janet, 73, spoke about her dog Badger and how he’s coped during lockdown.

Read more: Loose Women cut to 30 minutes for rest of the week due to horse racing

Host Christine Lampard asked: “Janet, you’ve got your dog obviously, is it a bit of a love/hate relationship?”

Janet replied: “It is very much so. At the moment Badger is in love with a new squeaky ball that he takes everywhere.

“This ball, I’m trying to watch television and it squeaks and squeaks and I cannot get it out of his mouth.

“The only way I can get it out of his mouth is to open the fridge door.

“Dogs have inexplicable fears that come from nowhere.

“One day, I opened the fridge door and there must’ve been some bottles in it.

“And it clucked and ever since then he thinks that the fridge door is the worst thing.

“So if I want to get to the ball off him and watch something in peace, I open and shut the door a few times.

I noticed he very cleverly rubbed his balls.

Saira asked: “Don’t you let him snuggle up to you while you’re watching telly, Janet?”

Janet said: “Well no because he’s a border terrier and he’s malting everywhere.

“Then the other night, he went and got on the bed.

“And I noticed he very cleverly rubbed his balls all over my socks,” as the panel burst into hysterics.

'She has changed my life. She's made me a better person.'

Saira tells the #LooseWomen why her little Vera has been a revelation 🐶 How have animals changed your life?

How have your pets been coping in lockdown? Leave us a comment on our Facebook page @EntertainmentDailyFix and let us know.