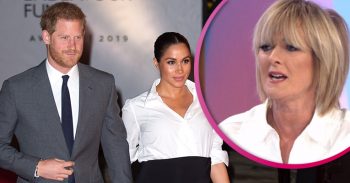 The royal couple won't be announcing their baby's birth straight away

Jane Moore has criticised the Duke and Duchess of Sussex’s decision to not announce the birth of their first child straight away.

On Thursday, the royal couple released a statement revealing they will share the news with everyone once they have “had an opportunity to celebrate privately as a new family”.

Read more: Prince Harry and Meghan to keep birth of royal baby secret until ‘they have celebrated privately’

“I get that she doesn’t want to come on the hospital steps with the newborn baby and that she wants a home birth, but if you’re going to have a baby at home, what difference does it make if you just tell people that you’ve had the baby?”

Her fellow panellist Nadia Sawalha added: “If you’re trying to dissuade interest – I think this creates it.

“They wanted us to be invested in their love story, and we are, and part of that story is their baby being born.”

Jane insisted: “We paid for that story. For the British, the royal family is ours and Harry is beloved, and so anything that makes us feel as though we’re being pushed back.”

However, panellist Brenda Edwards cut in: “I’m not too fussed about the fact that they want us to give them a bit of time. Let them enjoy the baby – there’s so much pressure on them.”

But Nadia didn’t seem to agree and hit back: “It goes against what the royal family is about.”

Jane added: “I think it’s quite Hollywood to try and stage manage stuff.”

Viewers watching from home were quick to defend Meghan and Harry.

One person wrote on Twitter: “Everyone slated Kate for coming out of Hospital wearing heels and taking pics, and now these bitches are slating Meghan and Harry for keeping it private ffs leave em alone! (sic)”

Another said: “Leave Harry and Meghan alone. If they want a couple of hours or a day or two to enjoy their baby then what difference does it make to you? #loosewomen.”

Earlier today, Meghan and Harry revealed they won’t be announcing their baby’s birth straight away.

A statement read: “The Duke and Duchess of Sussex are very grateful for the goodwill they have received from people throughout the United Kingdom and around the world as they prepare to welcome their baby.

Their plan breaks away from royal tradition as members of the royal family, including Duchess of Cambridge Kate, have appeared on the steps of the Lindo Wing, hours after giving birth, to present their new baby to the world.

Meghan is set to give birth any week now.