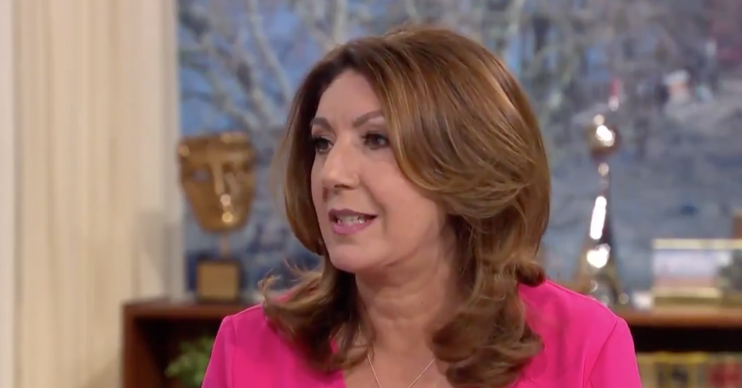 'I love being there, I love it,' she gushed on This Morning

TV favourite Jane McDonald has hinted she could be heading back to ITV as a Loose Women panellist.

The singing star, 56, previously made regular appearances on the daytime chat show for over a decade from 2004.

However, it has been several years since she last turned up on the series, having fronted Cruising with Jane McDonald for Channel 5 for the last years.

But now she has announced her departure from the show, many fans are wondering whether a Loose Women comeback could be on cards.

This weeks episode of 'Holidaying with Jane McDonald' will feature trips to #Bucharest, #NorthWales and #Ibiza with @lucyfallonx – on Friday 9pm on @channel5_tv

Appearing on This Morning earlier today, host Ruth Langsford asked Jane about the chances of a return – and Jane didn’t exactly deny the possibilitu.

Jane said: “I will always come and visit Loose Women, I love being there, I love it, and I owe so much to Loose Women as well.”

“I will always come and visit Loose Women, I love being there.

She also elaborated on her reasons for moving on from her last job, indicating she wanted to leave on a high.

“It’s been fabulous, it really has, and I always believe you should leave the party while you’re still having fun and I have had the most amazing four and a half years,” Jane noted.

Second week of working away and having a great time! #Cruise #Holiday

She added: “80% [of my year] I’ve been away and I just feel it’s time to step aside, pass the baton on, and go and do new things, and I thank Channel 5 for giving me the experiences that I’ve had because it’s been wonderful.”

In a post on her website at the end of February, Jane said she wanted to prioritise her singing career.

She wrote: “By now you will have seen the news about me stepping away from my shows on Channel 5.

“It’s been an incredible four-and-a-half years of travelling, 38 Cruises and over 100 flights.

‘Always make space for great things to happen’@TheJaneMcDonald may be about to quit her popular cruising show, but is about to charter her very own cruise! pic.twitter.com/eMu2hhYRZ7

“It’s now time for me to spend some time in the UK, concentrate on my music and tours and exciting new projects.”

The BAFTA-winner – who claimed the Features award in 2018 for Cruising With Jane McDonald – added her “sincere thanks” to the teams across all of her programmes, and described the experience as “a total joy”.

It was reported last year that Jane planned to stop meeting her fans after performances following police warnings she could be “a target” for an attack.

She wrote in autobiography Riding the Waves – My Story: “[An officer] told me, ‘You are a target and if somebody wants to get to you they know you’re going to be outside the stage door after a show.'”