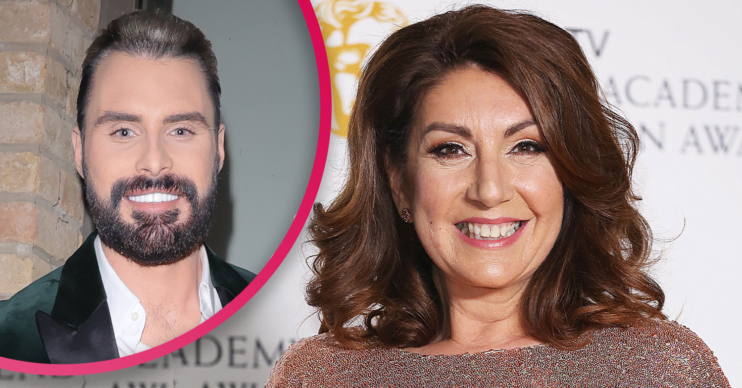 Jane McDonald looked stunned as The One Show‘s Rylan Clark called for her to be made a dame on the show last night (February 18).

The cruise-loving star was on the show with Rylan and co-host Alex Jones to chat about her new Channel 5 show Jane McDonald’s Yorkshire.

However, Rylan took the opportunity to declare not once but twice that he would love Jane to become a dame.

And, we have to admit, we are more than on board with the idea!

What did Rylan say about Jane McDonald?

It appears Rylan is a bit of a Jane McDonald superfan.

Throughout the show he couldn’t stop gushing about how much he loves the singer.

At the top of the show he introduced Jane, who appeared via video link.

We love you Jane! Get that Damehood please!

Rylan said: “We love you Jane!”

As the camera panned to Jane on Zoom, Rylan declared to the stunned star: “Get that Damehood please!”

What else happened on The One Show?

Later on in the show, Rylan appeared delighted as Jane confirmed that she would be ending episodes of Jane McDonald’s Yorkshire with a song.

Read more: Jane McDonald’s special tribute to her mum who she ‘cherishes daily’

Then, signing off from the interview, Rylan issued his plea again.

As a laughing Jane listened on, he declared: “Queen of Yorkshire and should be Dame Jane McDonald!”

The singer has the chance to impress the Queen this summer, as she takes part in her Platinum Jubilee celebrations.

Jane will play an outdoor show at Scarborough’s Open Air Theatre over the bank holiday weekend in June.

She’ll be joined by “special guests” during the live show, held to recognise the Queen becoming the first British Monarch to celebrate 70 years of service.

In return, could the monarch recognise Jane’s services to showbiz?

We most certainly hope so!

Head to our Facebook page @EntertainmentDailyFix and tell us if you’d like to see Jane become a dame.

Jane McDonald Rylan Clark The One Show The Queen