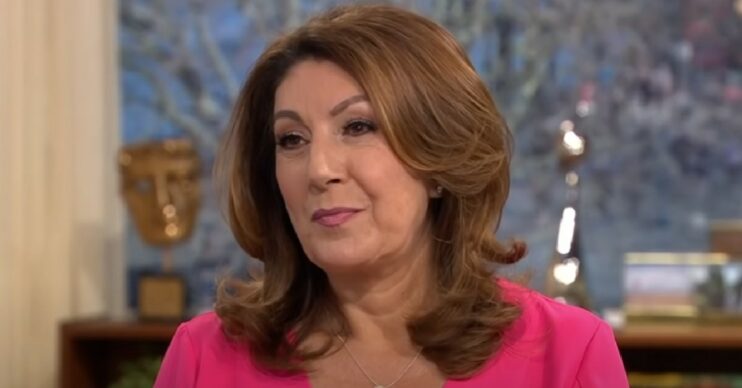 Jane McDonald’s cheeky dig at her exes: ‘You’d never look twice at them on land!’

Cruel dig or slip of the tongue?

Jane McDonald previously opened up about finding love on a cruise ship – but could a rather cutting comment from the singer have been a sly dig at an ex?

The star shared what life is truly like on a cruise in the programme she shot to fame on, The Cruise.

It first aired in 1998 and, in one episode, Jane made a comment about finding love at sea.

Except it wasn’t a particularly flattering one…

What did Jane McDonald say?

In a discussion on the show, Jane discussed how cruise ships can be a “hotbed of passion”, with relationships and flings regularly happening on board for guests, staff and both!

She explained: “All morals go out of the window on a ship.”

“Everybody falls in love on ships,” she said.

“I mean it’s the most romantic setting in the world, you’ve got the beautiful sunsets and you’ve got the gorgeous islands and the heat, I mean everybody just falls in love on a ship.”

“You go back to land and think, what have I done here?” laughed Jane.

Who was Jane McDonald’s ex-husband?

Of course, the pair originally met on board a cruise…

The star has often spoken out about how devastating the break up was for her.

In an interview, she said: “I was gobsmacked when it didn’t work out. I sat at home for six months with the shutters down until my mum said,:’Come on, get off your backside.’

“I didn’t even want to leave the house – I felt such a failure I didn’t want to see anyone.”

After divorcing Henrik, Jane never did walk down the aisle again. However, she did find love with Eddie Rothe.

In March 2021, Jane lost Eddie after he died from cancer. The singer announced the news in early April on her social media to an outpouring of support from fans.

In a recent episode of Holidaying with Jane McDonald, Jane could be seen getting teary eyed as she fondly remembered Eddie.

Singer Jane witnessed a wedding while on the Caribbean island, which left her emotional and reminiscing about life with fiancé Eddie.

She explained: “[I have been] asked to take part in the ceremony so I really need to hold it together.”

However, Jane so started to well up and apologised, saying: “I’m off already, I am useless.”

Wiping away tears as she spoke to camera, she admitted: “I never go to weddings because I am always crying.”

Holidaying with Jane McDonald airs on Sunday May 1 at 10pm on Channel 5.