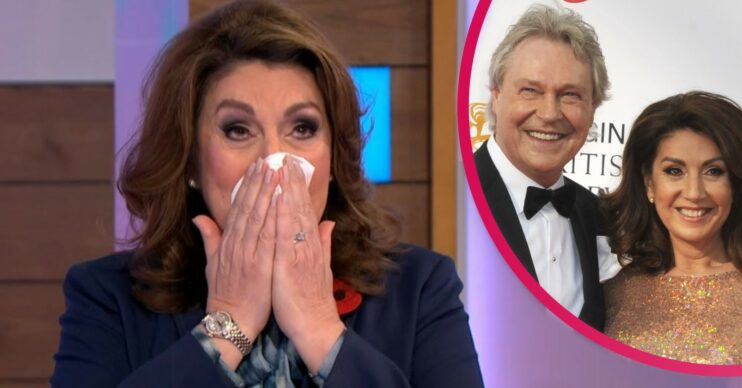 Eddie sadly died in March this year from lung cancer

Jane McDonald returned to Loose Women today and opened up about losing her beloved partner Eddie Rothe earlier this year.

Eddie sadly died in March at the age of  67 following a battle with lung cancer.

Jane, 58, broke down in tears as she remembered Eddie and opened up about looking after him in his final months.

As Jane was welcomed onto the show, she became emotional and reached for a tissue.

She continued: “I don’t want to feel sad for the rest of my life because that wasn’t Ed. Ed was golden, smiley, he was beautiful.

“I’ve got to do the first interview and I couldn’t be with better people here. It’s been tough but there’s so many of us out there who have been through this and my heart goes out to you all.”

Jane went on to speak about her relationship with Ed, revealing they dated when they were in their late teens, early 20s.

However, they then went their separate ways for 27 years before rekindling their romance 13 years ago.

Jane said: “13  years of absolute bliss. That’s how I’m getting through it. I’m not thinking of the last six months because it was horrendous.

“I’m thinking of how grateful I’ve been for such a wonderful…” as she began tearing up.

Speaking about Eddie’s last months, Jane explained that she cared for him because “no was allowed” to during the COVID-19 pandemic.

She said: “I had to have a crash course in nursing. Ryan, the lovely district nurse, – thank you Ryan – came and showed me how to do everything.

“Because it was lung cancer, they were so afraid of him getting Covid that I took over everything.”

Jane added: “And that was a privilege. At first I thought, ‘How am I going to do that?’ But then you get a strength when you’re nursing your loved one and it really is a privilege.

“I changed all the dressings and cared for him and I nursed him and I’m glad I did.”

Viewers watching praised Jane for her appearance and sent their support on Twitter.

One person said: “What an amazing women you are, your story and love for Ed has had me in tears today.”

Another wrote: “Bless you Jane. We are all having tears with you.”

A third commented: “You were wonderful, had me in floods of tears. You are an inspiration.”