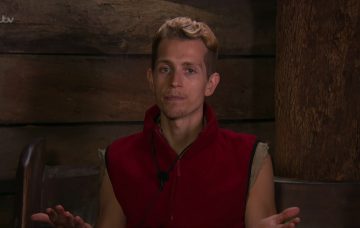 The Vamps guitarist James McVey will be the next star to leave I’m A Celebrity… Get Me Out Of Here!, according to bookies.

In tonight’s episode, which will see the seventh celebrity eliminated, James is favourite to go with odds of 6/5 from bookmakers Skybet.

Meanwhile, bookies BetWay are also tipping the 24-year-old to go home next, offering odds of 5/4.

Nick Knowles, who was eliminated last night, claims James wants to go because he misses girlfriend Kirstie Brittain so much.

Nick, 56, said on This Morning today: “I would like James to win it but I know he wants to get out as he’s desperately missing his girlfriend.”

Musician James has been worrying fans with his dramatic weight loss since being on the show.

He has been giving up some of his food to eldest campmate Harry Redknapp in a bid to help him keep up his strength.

While James has been popular on the show, Harry is favourite to win –  if the odds are anything to go by.

X Factor star Fleur is second favourite to leave the show tonight, with odds of 9/4 placed on her by SkyBet, while Dr Who actor John is third with 5/2.

Who do you think will be the next celebrity to exit camp?

Have your say. Leave us a comment on our Facebook page @EntertainmentDailyFix and let us know what you think!