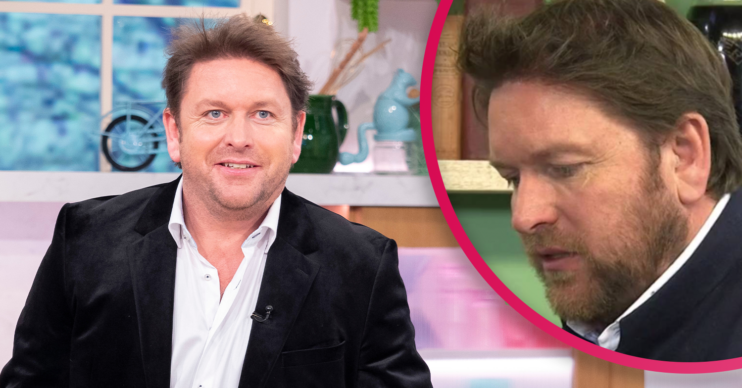 James Martin’s Saturday Morning: chef’s beard gets the thumbs up from viewers

How do you prefer the TV chef?

The popular TV chef, 48, is best known for keeping a clean-shaven appearance.

But he has dabbled occasionally with the odd bit of fluff on his face.

However, when he turned up on telly this morning with pretty much a full covering of fuzz, fans were quick to give their verdict.

And it seems they loved seeing James with his beard out!

Singer Jack Savoretti was among the guests giving James a helping hand in the kitchen.

However, Jack admitted he isn’t the handiest when it comes to culinary art.

He persisted, however, leading to plenty of Mickey-taking about his kitchen skills from James.

But although James spent time figuratively stroking his beard, his fans were not against him doing it literally, either.

“Loving the beard James, suits you!” gushed one admirer.

Another observer tweeted how they reckoned a similar thought – and that’s James’ beardy effort was a fine one.

They added: “@jamesmartinchef I am loving the beard James, really suits you and a very good one it is too! Xx.”

And yet another fan hinted they found James particularly attractive with a beard.

Attaching a heart emoji to their message, they posted: “Bearded @jamesmartinchef on TV….. oooft!”

Has James Martin had a beard before?

However, it seems that James’ facial growth has not always been the ideal choice of all of his supporters.

In late June, someone else tweeted how they preferred him with a smooth face.

They joked: “@jamesmartinchef I love you, like I honestly love you but can you ditch the beard before our wedding?”

A few months ago, James hit back after being criticised by some viewers over a claimed lack of social distancing on his show.

He came under fire for sitting close to guests on the programme, seemingly not following coronavirus pandemic guidelines.

However, James quickly cleared the matter up, explaining the show was pre-recorded.

Despite his explanation, it seems the reaction from some viewers irritated James.

Speaking to The Sun’s TV Mag, he admitted he felt it had been “pathetic”.

He said: “People didn’t realise and it all kicked off. It would be funny if it wasn’t so pathetic. I can’t be [blank] with them, and I don’t even respond to them.

“You just do what you do and give your very, very best. I’ve never given a [blank] about what people think anyway.”