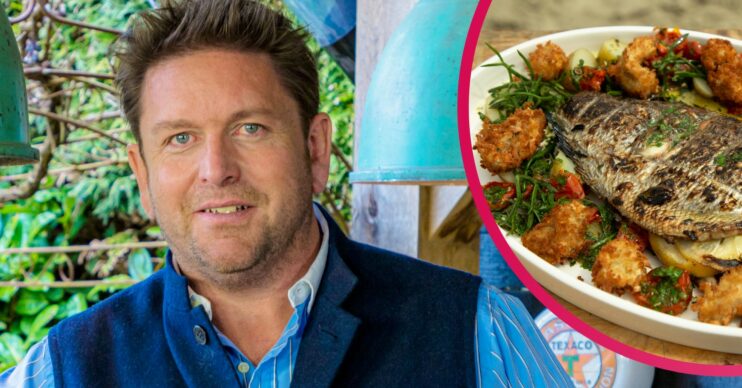 James Martin’s Islands to Highlands recipes: Where to find them

This week, the chef visits Jersey and cooks a delicious squid risotto

James Martin continues his adventure across the UK in his ITV1 series James Martin’s Islands to Highlands – but where can you find the recipes from the show?

This week (Monday July 12 2021), James travels through Jersey with his pal Mark Jordan.

Together, they cook up several dishes with local produce – including a squid risotto and barbecued sea bream.

James Martin’s Islands to Highlands recipes – where do I find them?

During last week’s visit to Cornwall, James cooked up deep fried megrim sole and fish selection with a chipotle dressing.

James, accompanied by his close pal Galton Blackiston, also barbecued a delicious surf and turf on the beach.

So there can you find the recipes?

His recipes can all be found in his accompanying cook book James Martin’s Islands to Highlands.

There are also many of his recipes available on his official website here.

However, not all of his recipes from James Martin’s Islands to Highlands are available online.

James uses Jersey’s most famous exports – the Jersey Royal potato – to cook up a squid risotto with a difference.

Next, James heads to the beach to cook barbecued sea bream with Jersey Royals, deep fried oysters and a classic sauce vierge.

Luckily for those with a sweet tooth, this recipe IS available online and can be found here.

In later episodes, James travels to Guernsey and Dorset.

Barbecued oysters and bacon with a pickled onion salad

To make James Martin’s recipe for barbecued oysters and bacon with a pickled onion salad, you need the following ingredients:

small bunch of tarragon, leaves only

12 freshly shucked oysters in their shells

To make, light your barbecue.

When the coals are silvery in colour, it’s ready to cook on.

Heat a non-stick flameproof frying pan on the BBQ.

When hot, pour in half of the oil, add the bread and fry until golden and crisps, tossing a few times so the croutons cook evenly.

Transfer to a bowl.

Drizzle the remaining oil into the same pan, then add the bacon and fry until crisp.

Drain the fat into a separate large mixing bowl, and transfer the bacon to the bowl with the croutons.

Whisk the mustard and pickled onion vinegar into the bacon fat and season well.

Add the salad leaves, lettuce, tarragon and sliced pickled onions to the bowl, toss well, then add half of the crispy bacon and croutons and toss again until everything is well dressed.

Put the oysters in their shells directly onto the coals of the BBQ and cook for two to three minutes.

Use protective gloves or tongs to remove the cooked oysters from the BBQ, as the shells will be very hot.

To serve, lay the oysters around the outside of a large round plate, top with the remaining bacon and croutons and pile the dresses salad in the middle.

James is joined by friend and Michelin-starred chef Mark Jordan on ITV1‘s James Martin’s Islands to Highlands on Monday July 12 2021.

The pair ride around Jersey on mini motorbikes while exploring the island’s culinary delights.

James samples one of Jersey’s most famous exports – the Jersey Royal potato – which he uses to cook up a squid risotto with a difference.

Next, James is treated to lunch at Mark Jordan’s beach restaurant.

He then heads to the beach to cook barbecued sea bream with Jersey Royals, deep fried oysters and a classic sauce vierge (virgin sauce).

James Martin’s Islands to Highlands continues on Monday July 12 2021 at 8pm on ITV1.