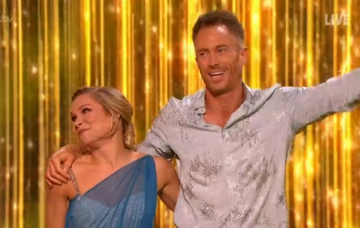 James Jordan wowed fans and the Dancing On Ice panel with the first perfect score of the series.

The ex-Strictly pro received a mark of 10 from every one of the judges on tonight’s live semi-final.

Jason Gardiner, usually the harshest critic in the line-up, described it as “the most masterful solo skate we’ve ever had”.

He said: “It was so beautiful. This for me was your goosebumps moment.

“I’ve been waiting all series to be covered in goosebumps by you and this was it.”

The celebs had to perform a 45-second solo on tonight’s show during the first of two routines.

Ashley Banjo told James: “It’s inspiring to me to think about where you started and the pressures you had as a performer.

“The most masterful solo skate we’ve ever had” 💖 @The_JamesJordan and @AlexandraLukasz absolutely stunned judges and audience alike tonight, scoring them a 40/40! #DancingOnIce pic.twitter.com/uQcsiNxm2r

“That was Dancing On Ice right there summed up.”

Jayne Torvill added: “I felt like I was watching a professional.”

Christopher Dean admitted he got so carried away by James’s routine that he initially pressed the wrong button instead of a 10.

He said: “I got so excited I pressed “one” and pressed enter.” Fortunately he corrected it in time.

After his sensational performance to James Bay’s Hold Back The River, the former Strictly star said: “I’m not often speechless, I’m usually gobby.

Viewers agreed on Twitter that it was a terrific routine.

Read more: James Jordan ‘could miss out on the rest of Dancing On Ice due to injury’

Did James’s routine deserve four 10s? Leave us a comment on our Facebook page @EntertainmentDailyFix and let us know what you think!

* Dancing On Ice concludes next Sunday evening on ITV.