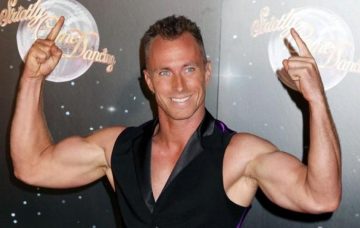 He believes his former employer has stitched her up...

James Jordan has attacked his former employer Strictly Come Dancing for its treatment of Ashley Roberts.

The former professional dancer has accused the show of hanging the Pussycat Doll out to dry as she’s been targeted by unhappy fans.

While she’s been disliked by the public for having dance experience, James insists she’s had no more than Steps star Faye Tozer.

James has slammed the BBC show for not defending Ashley against the backlash she’s received for her dance training.

Despite being an extremely good dancer and even getting a score of 40 from the judges, she has found herself in the bottom two for three weeks in a row.

Fiery James has revealed he feels “sorry” for Ashley and insists that she should have been protected from the amount of “stick” she is getting.

Read more: Strictly’s Susannah Constantine could be out of final group dance after injury

Speaking to The Sun Online, James predicted that Stacey Dooley would win this weekend’s big finale, but believes Ashley is the better dancer.

James, who was on the show for eight years, said: “I think Stacey will win, but I think Ashley should win. She is the best dancer.”

He continued: “She’s had so much stick and Strictly allowed that to happen.”

“There are other people in the show this year and previous years who’ve had just as much experience in dance,” he went on.

“I feel so sorry for Ashley. She’s had a really hard time. She’s trying hard if not harder than everyone is. I’m a professional dancer and what she’s doing is outstanding – regardless of whether she’s trained or not.”

He also showed sympathy for Ashley “going into the final knowing she has no chance of winning”.

He went on to say that Faye has as much dance training as Ashley, but that no one has called out the fact.

Not sitting on the fence at all, he added: “To say otherwise is rubbish. If you’ve been to stage school and done ballet or contemporary – they’re a trained dancer.”

Ashley is the bookies least favourite to win Saturday’s show.

She will compete against Joe Suggs, Faye Tozer and Stacey Dooley.

Who do you want to win Strictly Come Dancing 2018? Leave us a comment on our Facebook page @EntertainmentDailyFix and let us know what you think!