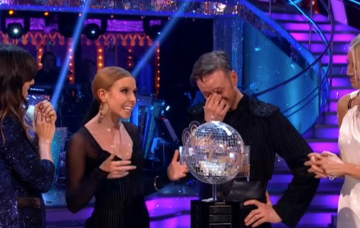 He wasn't impressed with their show dance

The former Strictly professional dancer took to Twitter to hit out at investigative journalist Stacey and dancer Kevin after they walked away with the prestigious glitterball trophy on Saturday.

He wrote: “It was a complete mess and didn’t understand the beginning AT ALL. NOT GOOD EVEN FOR A NON DANCER.

“Mmmmm I normally love Kevin’s Choreography but I just didn’t get this at all. A show dance for me should be full of lifts and an exciting and a mix of dances.”

However, he later went on to congratulate the pair, writing: “Well done to Stacey and Kevin. And also for making me a nice wage at the bookies.”

Stacey and Kevin faced fierce competition from Pussycat Dolls star Ashley Roberts and her partner Pasha Kovalev, Steps singer Faye Tozer and her partner Giovanni Pernice, and YouTube star Joe Sugg and his partner Diane Buswell, but the Stacey Dooley in the USA star ultimately walked away as the champion.

Praising Kevin for his work in teaching her to dance, Stacey said: “Kev, listen. You know how highly I think of you. I think you’re the biggest gem.

“It’s absolutely no kind of coincidence that he’s been in the final as many times as he has.

“You’re patient, talented, your choreography is second to none. I’ve had the most incredible time.

“And you know what, it’s daunting doing something you haven’t done before.

“You feel silly, you feel like a bit of an idiot. But Kevin walks you through. And you so deserve this.”

Kevin, 36, has made it to the final of the show five times out of the six series he’s been a part of, but his win with Stacey marks the first time he has ever held the glitterball trophy.

Speaking about the achievement, he told Stacey: “Thank you so much. Not just for being so amazing and dancing so well and getting this, but just for being the most wonderful person to work with, to spend every day in training with.

“You’ve worked so hard, and always with a massive smile on your face. You’re just so lovely, and I think the absolute world of you, thank you so much.”