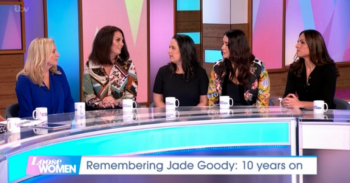 One of Jade Goody’s bridesmaids has revealed she “screamed” when she told her sons she was going to die.

Jade passed away to cervical cancer on March 22, 2009 and her two boys Bobby and Freddie were just five and four-years-old at the time.

The star’s five best friends, who were her bridesmaids at her wedding to Jack Tweed, appeared on Wednesday’s Loose Women to mark the tenth anniversary of Jade’s death.

Read more: Jade Goody’s widower Jack Tweed on his pain over her death ten years on

As they watched video montage of the months leading up to her death, the group became emotional.

Jade’s pal Kate revealed the late star “comforted” her loved ones as she told them of her terminal diagnosis.

However, when it came to telling her sons, Jade “lost it” and was unable to control her emotions.

Kate explained: “I saw her tell a lot of people [she was going to die] and she comforted her grandad, her mum, and her friends.

“The only time I saw her lose it was then. That was the only time you could hear her screaming.

“She tried to tell them in her own way, she tried a few times. It was awful.”

Jade finally managed to tell her boys that she was going to heaven to be with angels.

Speaking about Jade and Jack’s wedding, Caroline said: “It was bittersweet because from the start to the end, you are just looking at Jack and it was devastating.

“You go to a wedding, you see they’ve got their life ahead of them, to know for him it was weeks away until her death.”

Caroline then joked: “She was a bridezilla. We all had our jobs, our phones were going off. She said to me, ‘You need to have a week off [work].’ She said, ‘tell your boss, let me speak to him.'” 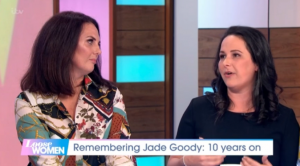 Speaking about Jade, pal Kate said: “She was one of those friends that gave you that belly laugh, she was extremely loyal, very generous. You always knew you were going to have a good time with Jade.

“It was never a boring time.”