Jacqueline Jossa has released statement about their rumoured split

I’m a Celeb winner Jacqueline Jossa has said she and husband Dan Osborne are ‘working together not against each other’ after rumours they had broken up during lockdown emerged.

A source told The Sun on Sunday that she needed some “breathing space” after lockdown magnified everything, but that she still wants to work on the marriage.

They said: “There’s still a lot of love there but quite simply, Jacqueline needs some breathing space…

“They plan to reassess everything once the coronavirus madness is over… By splitting short-term, she hopes to save their relationship long-term.”

The 27-year-old is thought to have moved in with her parents after their relationship was dogged by claims that he had been unfaithful.

But Jac took to her Instagram stories to set the record straight, saying: “I need some time. There is no split. No divorce.

Former-Towie star Dan, 28, is looking after his son from a previous relationship, it was reported. 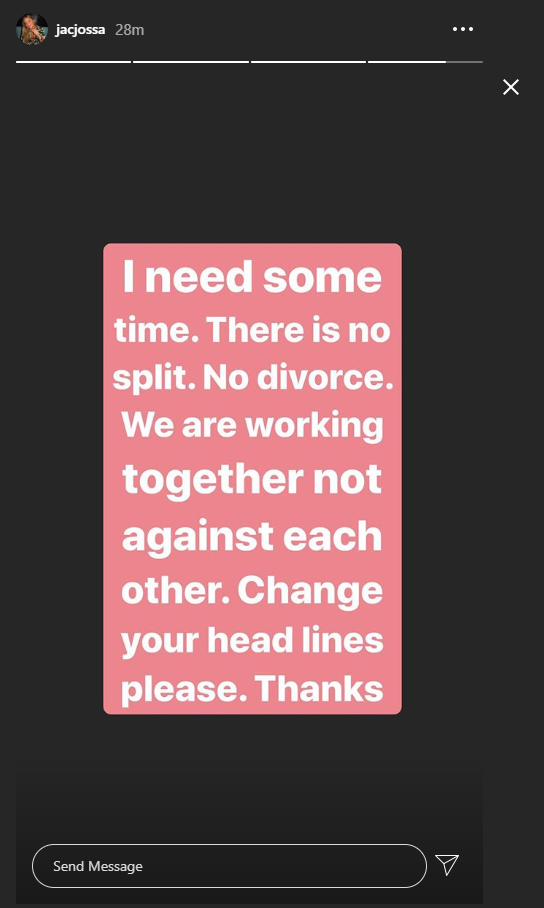 Earlier this week, the mum of two revealed she was taking some time for herself, as she explained she wasn’t posting so much on social media.

Good morning! 💞🙌🏼 Holding back on posting as much recently just taking some time✌️ hope you are all good! Speak soon! Xx

“Holding back on posting so much recently just taking some time,” she informed her followers

Dan and Jacqueline’s relationship has been turbulent, and claims he had been unfaithful emerged after Jac triumphed on I’m A Celebrity in December.

He wrote on Instagram: “So after weeks, months, years of constant articles and rumours, some true, some very untrue I want to publicly say, I know I have made mistakes, we all do as humans, but I’ve made some that have almost cost me my family.

We are working together not against each other.

“I have seriously learnt from these massively, so I want to ­publicly apologise to my beautiful wife and my family for the mistakes I’ve made.

“I am the luckiest man in the world to have what I have with Jacqueline and my three incredible children and I will spend the rest of my life being the best husband and dad that I can be.”

The weather is STUNNING🙌🏼❤️ Lots of love to you all, happy Friday. 2020 isn’t going to plan but hey, we are safe and doing the best we can! Home schooling is HARD! 🌈