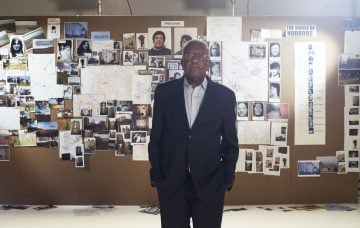 The documentary was hosted by Trevor McDonald

Fred and Rose West: The Real Story finally aired last night after being pulled from the schedules in January for “legal reasons”.

And fans were left sickened by the documentary, which revealed the disturbing part that Rose played in the ‘house of horrors’ murders.

Read more: Young man was 10 days from death after years of abuse from his girlfriend

Viewers feared the episode would “give them nightmares” and even urged people to “turn off” rather than watch the “vile” events.

Another said: “This Fred and Rose West story is spine-chilling. I know they were psychos but this is on another level  #CrimeandPunishment.”

“That Rose West makes me sick,” said a third, while one more said: “This Fred and Rose West documentary is going to give me nightmares now.”

Fred and Rose West stuff will give me nightmares tonight. Should turn it off #vile

This Fred and Rose West story is spine chilling. I know they were psychos but this is on another level 😩 #CrimeandPunishment

They originally tried pinning fred as the dominant but going factual evidence points to rose, who still denies everything to this day.fred on the other hand,took his own life.

Continuously dumbfounded every time I see or read anything about the West's. Everything they did is beyond comprehension. Sick, sick monsters the pair of them. #CrimeAndPunishment @ITV

Surely the most 2 evil people ever? #CrimeAndPunishment

Rose will never give up any information. She’s in control and has the power and that’s how she’ll keep it until the day she dies #crimeandpunishment

Read more: Girl was kidnapped TWICE by family friend after he brainwashed her parents

“They originally tried pinning Fred as the dominant one,” said one, “but factual evidence points to Rose, who still denies everything to this day”.

The one-off doc aimed to “discover new insights with exclusive, never seen before interviews” into the case that shocked the nation 25 years ago.

While Fred West confessed to the crimes and took his own life in prison on New Year’s Day 1995, mother-of-eight Rose has always denied any knowledge of her husband’s crimes – although she is serving a life sentence.

However, Trevor and his team set to shine a light on Rose’s real involvement.

The documentary suggested she had a driving role in the multiple murders that took place on 25 Cromwell Street and where the West’s buried their victims.

Rose’s part in the murder and torture of 12 women and young girls was revealed by experts such as author Howard Sounes, who said: “The world thinks of Mrs West as this frumpy middle-aged housewife but she was this pretty teenage girl when the murders began.”

Rose was 15 when she met Fred, who was 12 years her senior, and had already committed murder.

He said: “It’s tempting to think he would be the dominating individual.

“I think it’s very probable that she was already very manipulative and she saw in Fred somebody she could manage in some way to achieve what she wanted.”

He added: “Rose was stronger psychologically. Rose kept her cool. ‘I know nothing. I didn’t do it’.

“Rose discovered very early on by refusing to admit anything, she’s also keeping at bay the detailed examination of all her activities.”

Viewers watched in horror as they were reminded of the West’s crimes – including targeting their OWN children.

Their eight kids were taken to hospital 31 times in 20 years for various injuries – and one child had an STI.

Visiting the house with Trevor, author Howard said: “Rose was the one who had the terrifying temper, who flew off the handle, who screamed at them and beat them.

“In those moments of fury I would say Rose would be capable of anything.”

During the hour-long doc, Rose’s former solicitor Leo Goatley revealed how she even turned on her own husband in the dock, “wanting nothing to do with him”.

In a shocking twist, Leo added: “I can’t say she portrayed any self sorrow when he died. On the contrary she glowed with a certain relief. There was this expectation she didn’t go to trial and would get away with it.”

An insight into one of the most chilling murder cases in in British criminal history.#CrimeAndPunishment: Fred & Rose West The Real Story with Sir Trevor McDonald next on @itv pic.twitter.com/LSY2emdLfH

Fred took his own life in 1995 when he was charged with 12 murder, but died before he was convicted. Rose was found guilty of 10 murders and was sentenced a whole life tariff in prison, which means she will never be freed.

Viewers called the couple “sick monsters” and revealed they felt “ill” by the reminder of the crimes.

One spoke for everyone when they tweeted: “Surely the most 2 evil people ever?”

Did you watch the Fred and Rose West documentary? What’d you think? Leave us a comment on our Facebook page @EntertainmentDailyFix and let us know what you think!