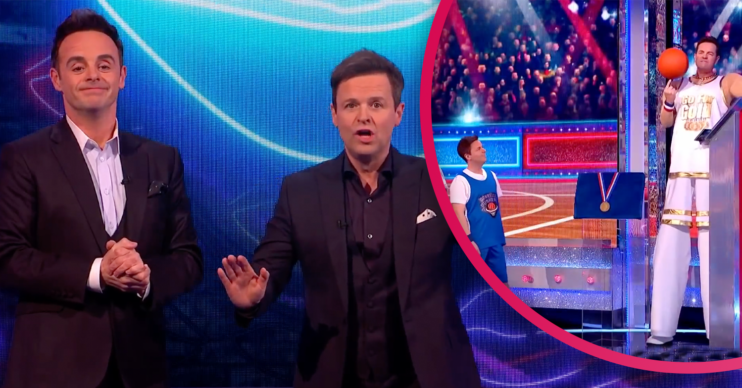 They took offence on Dec's behalf!

They played a prank on their old SM:TV Live pal, and she took part in the End Of The Show Show.

However, while many loved the show, others took exception to comments made throughout the show about Dec’s height.

What did Saturday Night Takeaway viewers complain about?

SNT viewers appear to have taken offence on Dec’s behalf over a number of jokes about his height.

The episode received 96 complaints and Ofcom confirmed they were about “a few different issues including the innuendos used and height jokes”.

During the End Of The Show Show, Sting called Dec “stumpy”.

At another point, Stephen Mulhern appeared on stage to host Ant vs Dec wearing stilts.

‘Everything’s bigger than him’

Bear Grylls also made a jokey quip during their Double Trouble comedy sketch.

Dec asked: “Have you come to rescue us?”

Read more: SNT fans in hysterics as viewer threatens to flash her boobs live on air

Bear replied: “No, this thing is way bigger than you!”

Ant then declared: “Well everything’s bigger than him.”

Other viewers complained about the innuendos that featured in the show, which airs at 7pm.

The hosts’ jokes were deemed “too rude” by viewers, The Sun reported.

What did Saturday Night Takeaway fans say about the complaints?

Posting on Twitter today (March 25), one fan of the show declared the world had “gone mad”.

They said: “THE WORLD HAS GONE MAD…. How the [bleep] does this get complaints. Some people need to get a life and a sense of humour.”

Soon we won’t be able to speak at risk of offending someone. Ant and Dec are light relief in this crazy world right now.

A third added: “Soon we won’t be able to speak at risk of offending someone. Ant and Dec are light relief in this crazy world right now.”

SNT received 104 complaints, with 64 of those concerned with his comments on a viewer’s teeth.

The quip came during the show’s Read My Lips segment.

Head to our Facebook page @EntertainmentDailyFix and tell us what you thought of the show.