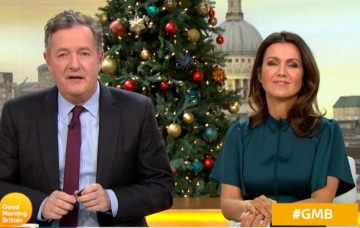 Piers Morgan’s colleagues reveal how they cope with his rants

Piers suggested he would like ‘little cameras’ on all of them

Local ITV News teams are poking fun at Piers Morgan by showing what it is they get up to while he “rants” on Good Morning Britain.

Piers told viewers of the show on Tuesday morning he would like “little cameras on all” of the regional news teams as they wait for him to stop speaking and introduce their segments.

Our faces in ‘the regions’ when @piersmorgan goes on a rant 😂 @GMB @susannareid100 @CharlotteHawkns #hangry pic.twitter.com/JT7tL0Naxd

“We should have little cameras on all of them as they wait minute after minute to do the news, furious with me as I rant about veganism,” Piers said to fellow presenters Susanna Reid and Charlotte Hawkins.

The comment was met with a face of bewilderment by ITV Central News’ Yasmin Bodalbhai.

ITV Tyne Tees responded to the suggestion by sharing a video of Rachel Sweeney getting some ironing done while she waited for him to finish.

Since @piersmorgan and @susannareid100 are talking about how long Piers has the regions waiting…. THIS is how long he has us waiting! @GMB @ITV @errongordon #HowayPiers #HurryUp pic.twitter.com/6RGjclYGLi

Come on @piersmorgan! At least I can make sure the studio’s ready. @susannareid100, @CharlotteHawkns, @GMB When ever you’re ready!! pic.twitter.com/HMsBX0UCSh

And finally, Sascha Williams of ITV News Anglia simply banged her head against the wall while she waited for Morgan to stop.

The latter was a reaction other presenters appeared to agree with.

Sweeney, of ITV Tyne Tees commented on the video “I feel ya”, while ITV London’s Sally Biddulph added: “Sooooo feeling your pain… head banging, eye rolling, exasperation… full remit of emotions waiting for @piersmorgan to throw to us in the regions.”

Sooooo feeling your pain…..head banging, eye rolling, exasperation …..full remit of emotions waiting for @piersmorgan to throw to us in the regions. @itvlondon @GMB

What do you think about Piers’ ranting on GMB? Leave us a comment on our Facebook page @EntertainmentDailyFix and let us know what you think!