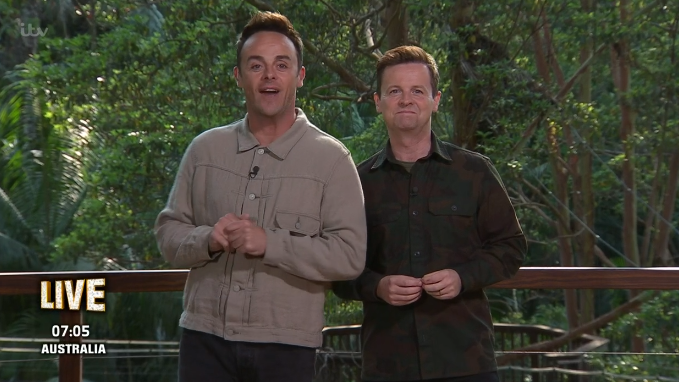 ITV ‘has renewed I’m A Celebrity for another three years’

ITV has renewed I’m A Celebrity for ‘another three years,’ according to reports.

The hit show – fronted by Ant McPartlin and Declan Donnelly – is apparently set to become the longest-running reality series on television.

Read all: Jacqueline Jossa urged to make a ‘fresh start’ in LA by I’m A Celebrity co-star

According to The Sun, the show – which began in 2002 – has been extended by the channel.

In that first series, veteran DJ, Tony Blackburn, became the first-ever King Of The Jungle.

hroughout the 19 series lots of all-time classic moments in The Jungle have occurred, including the now infamous Bush Tucker trials.

Throughout the 19 series lots of all-time classic moments in The Jungle have occurred, including the now infamous Bush Tucker trials.

In series three in 2004, Katie Price and Peter Andre first met and in 2006, Myleene Klass was a hit with viewers thanks to her bikini-clad waterfall shower sessions.

Add in memorable appearances by Gillian McKeith, Paul Burrell, Scarlett Moffatt and Gemma Collins, and it’s easy to see why fans are eager to see more.

Last year’s competition was wracked by controversy when contestants James Haskell and Ian Wright were accused of ‘bullying’ other campmates.

During his time in the jungle, James, 34, angered viewers when he snapped at Good Morning Britain’s Kate Garraway and clashed with Andrew Maxwell over the Dingo Dollar questions.

Eventual winner, Jacqueline Jossa, defended the ex-England rugby star, saying on Heart radio: “I was worried he was coming across differently, because in there he done everything for everybody and he might have had a bit of a tough time coming out, I was worried they had only showed his bad bits.”

James was later slammed by a disability charity after he made an ‘ignorant’ on Jacqueline’s Instagram feed.

Commenting on image showing the Queen of the Jungle standing on a beach with a football, he said: “You look like you are waiting for the sunshine bus and if anyone touches your football you will go mad.”

Jacqueline herself was at the centre of controversy, too, when fellow campmate Myles Stephenson reportedly told her that husband Dan Osborne had cheated with Love Island star Gabby Allen.

Despite being a fan favourite among fans, the opening episode of series 19 pulled in a million less viewers than its 2018 counterpart.

The previous year’s opening episode saw Holly Willoughby take over as co-host after Ant took a year off following his drink-drive arrest in 2018.

Last year’s opening episode, which saw the likes of Caitlyn Jenner, Ian and Roman Kemp head into the jungle, peaked at 10.9 million viewers, according to ITV.