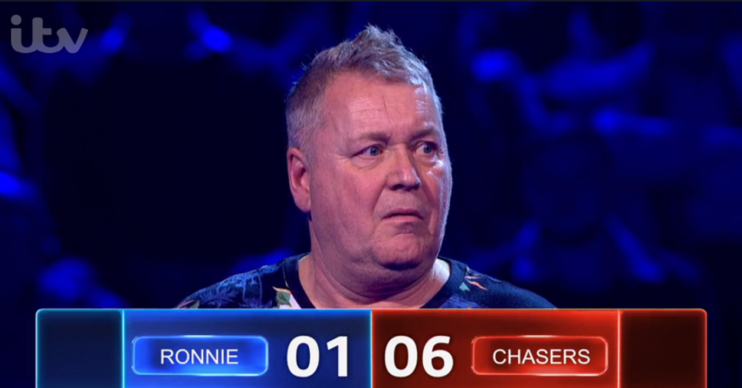 ITV viewers were fuming as they watched a Beat The Chasers contestant named Ronnie “robbed” of his £50k winnings.

On last night’s (Wednesday, April 29) episode of The Chase spin-off series, Ronnie Watson from Hull racked up £3,000 in his cash-builder round.

In the head-to-head, he took an offer of £50k with a time advantage of just 10 seconds against the five chasers – Mark Labbett, Anne Hegerty, Paul Sinha, Jenny Ryan and Shaun Wallace.

“If I was a High Court judge I’d be reaching for the black cap now,” The Beast warned him, drawing laughs from Ronnie and the studio audience.

How did Ronnie do?

It was a tense head-to-head. And in the end, the chasers had just six seconds left when it was Ronnie’s turn.

As his final seconds ticked down, host Bradley Walsh quickly read out the question: “Shiitake is a type of what food?”

Ronnie blurted out, “Mushroom!” just as the buzzer went – and with it, his £50k winnings.

“Mushrooms are right but just out of time,” Bradders said, consoling him.

But some viewers at home think the show made a blunder – and that Ronnie’s answer was delivered in full before the final buzzer.

One said: “Aren’t you ashamed stealing #Ronnie’s money when he gave the right answer ‘Mushrooms’ just before the time ran out?!?”

Another said: “Yes, but Ronnie was robbed at the end! He said ‘Mushroom’ before the buzzer. #BeatTheChasers.”

A third wrote: “Ronnie defo got there in time then for £50k, he’s been shafted #BeatTheChasers.”

Ronnie was robbed at the end!

Someone else said: “I’m sure Ronnie said the answer before the buzzer went. Justice for Ronnie! #BeatTheChasers.”

What does ITV say about it?

ED! contacted ITV for comment and a spokesperson for the broadcaster said: “Ronnie’s answer was correct, but unfortunately out of time.

“This was formally checked and confirmed by the adjudicator. Ronnie accepted and agreed with the decision.”

Aren't you ashamed stealing #Ronnie's money when he gave the right answer "Mushrooms" just before the time ran out?!? #BeatTheChasers @ITVChase #50k

Yes, but Ronnie was robbed at the end! He said ‘Mushroom’ before the buzzer.#BeatTheChasers

I'm sure Ronnie said the answer before the buzzer went.

Ronnie defo got there in time then for £50,000 he’s been shafted #BeatTheChasers

Elsewhere on last night’s episode of Beat The Chasers, another contestant came close to taking home a five-figure prize – falling at the last second.