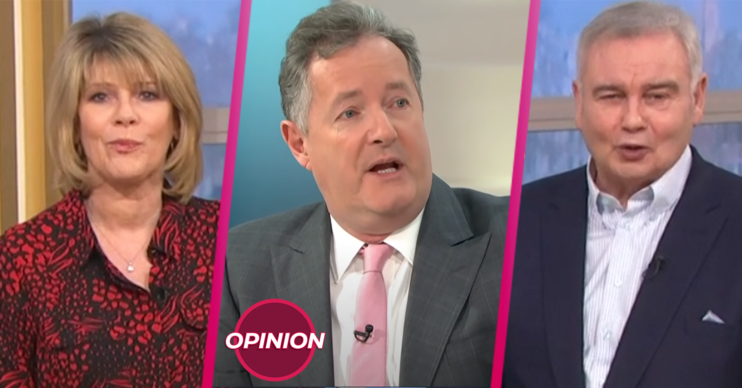 A 'massive shake-up' is needed

TV critic Christian Guiltenane laments the loss of Piers Morgan on Good Morning Britain and advises how ITV should save the ailing show.

It’s almost three months since Piers Morgan walked out of Good Morning Britain and I’m still trying to come to terms with it.

And so it would seem are the viewers, who are seemingly still switching off in their droves.

A whopping 57, 0000 viewers – including Meghan’s own team – complained to ITV and Ofcom about the comments he made about the Duchess of Sussex’s mental health.

However, while many were thrilled that Piers had quit the show, almost 250,000 devoted viewers launched a petition to have him reinstated.

A week after he quit, GMB has reportedly lost nearly a third of its viewers since he quit, with many complaining the show has lost its edge.

And things have gone from bad to worse, with rumours Susanna Reid might follow her former TV husband out the door.

Piers Morgan on Good Morning Britain: ‘His opinions were ferocious’

I used to regularly tune into Good Morning Britain Monday to Wednesday just to watch Piers Morgan shoot down idiot politicians, take racists, homophobes and bigots to task and poke fun at ridiculous decisions made by the PC brigade.

His opinions were strong, ferocious even. But they were his, leading to some great fiery debates which had viewers engaged whichever side of the Morgan fence they sat on.

Now we have his brilliant counterbalance Susanna Reid teamed with the lovely Ben Shepard – a brilliant presenter with a fun, cheeky sense of humour.

However, while they do have great on-screen chemistry, it is a very different kind to the chemistry Susanna shared with Piers.

I miss waking up to see Piers with his chest puffed out like a penguin and his inflated red face about to explode, ranting about vegan sausage rolls or savaging Love Islanders for their overuse of the word ‘like’.

Piers revolutionised breakfast TV. He made it essential viewing, even before we’d got to wipe the sleep from our eyes.

Good Morning Britain, like The Big Breakfast decades before it, was like a runaway train. No one really knew what was going to happen next – not even the production team.

Piers would let segments overrun when debates got fiery or he wanted to embark on a scorching hot diatribe.

He’d hilariously rip into boring BBC Breakfast at every opportunity (something UK presenters never normally do).

And he had absolutely no qualms about laying into someone who spouted idiotic guff.

Remember his brutal take down of Rudy Giuliani?

So what are we left with?

To sound like Louis Walsh, Piers Morgan is what TV is all about.

Yes, he may have put the W in anchor, but he got us all talking, whether we agreed with him or not.

He made for compelling TV, pushed boundaries, set agendas and on some occasions even helped change government policy.

Now, what do we have?

Susanna and Ben are brilliant presenters. But even they will recognise it’s just not the same any more and that Piers and his force 10 hurricane personality is a hard act to follow.

And if the ratings slide is anything to go by, the viewers know this too.

So what’s next for GMB?

Well, if producers are clever they’ll totally revamp the show.

It’s hard to replace Piers with an equally outspoken rent-a-gob without viewers thinking they’re trying to replicate what went before.

And if they did, it’d feel like they were merely plastering over a massive wound.

So the best thing to do is to give the format a massive shake-up.

It needs two exciting and compelling presenters with a strong chemistry who are feisty and exciting and aren’t afraid to pack punches.

Ideally, two unexpected faces should take over the reins.

But if we have to stick to the “ITV family” pool, why not give Eamonn Holmes and wife Ruth Langsford their rightful place on the show?