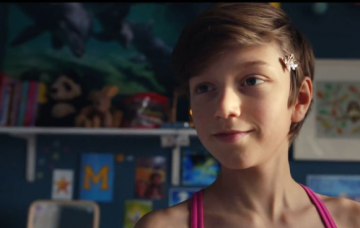 It's covering a controversial topic

ITV bosses admitted they were expecting a backlash from some viewers ahead of the screening of Butterfly last night.

The drama follows the Duffy family as they try to come to terms with 11-year-old son Max wanting to live as a girl.

ITV’s Head of Drama, producer Nicola Shindler, who has described the series as a “heartwarming” tale that “focuses upon gender identity and one boy’s search to be recognised for who he really is” anticipated strong reaction.

“It’s an incredibly difficult subject matter because people are so anti or so pro.”

The first episode revealed that Max’s parents, played by Anna Friel and Emmett J. Scanlan, had separated because of the pressure of what was happening with their youngest child.

Mum Vicky has been allowing Max to live as a girl at home, on the agreement that she live as Max in public, something dad Stephen didn’t agree with.

He was hoping that Max was going through “a phase”.

But as Max starts secondary school, she reaches a point where she can no longer tolerate this and wants to identify as female, and one harrowing scene saw the pre-teen slashes her wrist.

Sure enough, the drama drew conflicting reactions from viewers, some disturbed by the attempted suicide scene.

As someone who used to self-harm, & is well aware of the lure of it, I’m horrified that #Butterfly showed a child slitting their wrists & saying it made them ‘feel better’. What are @ITV trying to do? @samaritans

But others pointed out this is a brutal fact of life in such circumstances.

A nine year old committed suicide for being gay. I tried to commit suicide when I was 12. Just one year older. Is it that hard to believe? #Listen #TransGender #butterfly #transphobia #getreal #kidsdocommitsuicide https://t.co/U1aYxCNTeS

Others expressed how vital the drama was for raising awareness.

#ButterflyITV about time transgender topics were covered to increase awareness. This is NOT a choice; for trans people and their families it is a journey with many hurdles. Many of which are created through a lack of understanding. I commend you @ITV #butterfly #itv #transgender

Love the new tv show #butterfly Really important to be made aware of! 🦋

Just caught up on #Butterfly and all i can say is “Well done”❤this story needed to be told,a story that children,teenagers,grown ups who still feel uncomfortable in their penso skin,need to watch, cos it’ll help. I loved seeing the focus on the parents reaction 🙌🏼👏🏼 @ITV

People who had been through similar experiences praised the drama and TV bosses for tackling such an important subject.

#Butterfly was like a scene of my life story and many others. Kids have been in this situation forever, not just recently. What this drama shows is the struggle all trans kids have, old ones like me and new ones just beginning. Elements of it are always the same, brilliant 🌈👏👏

Watching #Butterfly last night was at times hard because it showed issues I myself delt with years ago and broght them back to the surface. I am glad for the show though it has been well made and dispite the backlash from closed minded people it is something that needed to be

#Butterfly hit home last night, it made me think what would of happened if when we took our depressed 5year old to the child psychologist, we’d had advice, now seen as harmful, to “keep it in check”. Instead we listened to our child, went at their pace, & she’s thriving.

Did you watch Butterfly? Leave us a comment on our Facebook page @EntertainmentDailyFix and let us know what you thought of it.