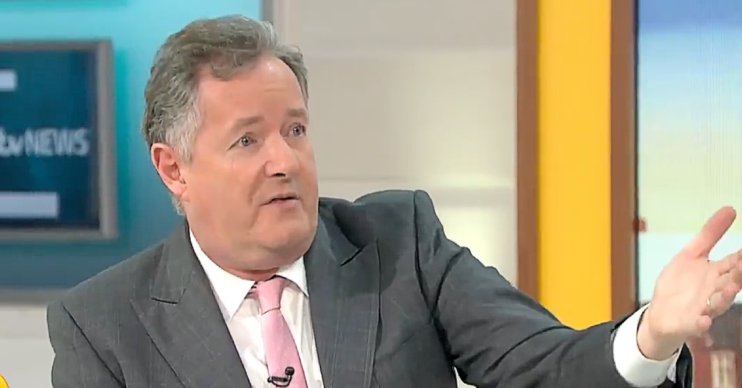 Comes after he stormed off set during today's show

It comes following a statement earlier that it was “dealing” with calls for the GMB host to step down. This followed comments about Meghan Markle’s Oprah revelations.

After the altercation, GMB viewers were quick to offer their take on Piers’ comments, with many branding them “dangerous” and “vile”.

Others said they were reporting him to regulator Ofcom.

In a brief statement ITV said: “Following discussions with ITV, Piers Morgan has decided now is the time to leave Good Morning Britain.

So what did Piers Morgan say on GMB about Meghan?

During his ruck with Alex, Piers seemed to suggest that he didn’t “believe” Meghan’s comments when it came to getting help for her mental health.

“Who did you go to? What did they say to you?” he blasted.

Read more: Andrew Morton declares Harry and Meghan interview is Diana ‘getting revenge from beyond the grave’

“I’m sorry, I don’t believe a word she said, Meghan Markle. I wouldn’t believe it if she read me the weather report.

“The fact that she’s fired up this onslaught against our royal family I think is contemptible.”

How did ITV react to comments from Piers Morgan on GMB?

According to the Hollywood Reporter, CEO Carolyn McCall was asked about Piers’ controversial reaction to the Oprah interview in a phone call with journalists.

She gave Meghan her full backing, saying she “completely believes” what Meghan said about having suicidal thoughts.

McCall added that ITV is “totally committed to” mental health. She added that “everyone” has to listen to and believe people facing challenges.

She added: “I haven’t spoken to Piers myself. I know Kevin Lygo is speaking to him on a regular basis and has done so the last couple of days.”

I know Kevin Lygo is speaking to him on a regular basis and has done so the last couple of days.

She was also asked about him storming off the set of the ITV breakfast show and confirmed she didn’t actually see it.

However, McCall argued that “it was a very balanced show this morning” that tried to live up to ITV’s goal of representing “many voices”.

She also confirmed there was “nothing manufactured” about Piers’ reaction.

McCall was also asked about Piers’ future at the show, given his comments about Meghan both on air and on his Twitter feed.

“Piers is a freelance presenter for ITV,” she said, adding they have “absolutely no say or control” over his “personal account”.

However, she added that his comments on air are “different”.

As a result, McCall added that this is why “Kevin Lygo is discussing it with Piers”.

She was also asked if Piers would lose his job over his outbursts.

McCall said: “We are dealing with that as we speak” and “I’m not making any comments on this”.

It said: “We were disappointed and concerned to see Piers Morgan’s comments on not believing Meghan’s experiences about suicidal thoughts today.

“We are in conversations with ITV about this at the moment.”

If you are struggling with your mental help, you can call the Samaritans free any time on 116 123 or visit the website here.

Head to our Facebook page @EntertainmentDailyFix and tell us what you think about Piers leaving GMB.