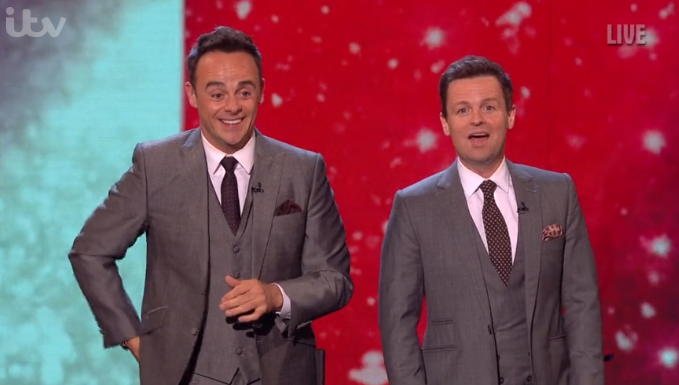 It's under two weeks ago

ITV has announced the new series of Britain’s Got Talent will start in just under two weeks.

It was recently revealed that auditions would broadcast in the next few weeks however, the live shows will be postponed amid the coronavirus pandemic.

Now, ITV has confirmed the new series will start on Saturday, April 11.

The talent show – which is hosted by Ant McPartlin and Dec Donnelly – recently said the live programmes will broadcast “later in the year”.

ITV said in a statement: “The Britain’s Got Talent audition shows are due to be broadcast in the next few weeks as planned.”

The show has been “working with brilliant production teams” to find a way of “making the live finals work”, which were due to broadcast at the end of May.

“However, in light of the latest government health guidelines, production of the live shows cannot go ahead as planned.”

The statement concluded that the live finals will therefore broadcast “later in the year”.

There have been huge changes to the TV schedules after Prime Minister Boris Johnson enforced a three-week lockdown in the UK.

Daytime shows Lorraine and Loose Women have been pulled from the ITV schedule.

Good Morning Britain now airs from 6am to 10am, with Lorraine Kelly joining from 9am.

Meanwhile, This Morning – hosted by Holly Willoughby and Phillip Schofield – airs from 10am to 12:30pm before a repeat episode of Loose Women follows.

Elsewhere, there’s been changes to the soaps.

Are you looking forward to the new series of Britain’s Got Talent? Head to our Facebook page @EntertainmentDailyFix and let us know.