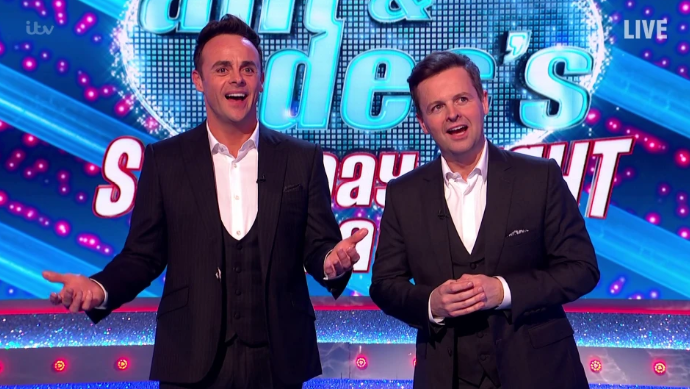 ITV has apologised “for any offence caused” during a performance by Anne-Marie during this weekend’s Saturday Night Takeaway.

The singer took to the stage for the End of the Show Show to sing her song Ciao Adios, while hosts Ant McPartlin and Dec Donnelly joined in the martial arts inspired performance.

The presenters wore headbands that featured the Japanese Rising Sun flag, which is seen by some as a symbol of Japan’s imperialist past.

ITV has said it’s edited the episode to remove any imagery of the flag, which was used by the Imperial Japanese military in World War II and is considered offensive by many people.

ITV said in a statement to Metro: “We apologise for any offence caused during the End of the Show Show by the costumes worn.

“This was clearly unintended and we have taken steps to re-edit that part of the episode for the Hub and for repeat broadcasts.”

She wrote: “I sincerely apologise to all those who were affected and hurt by my appearance last night on a UK TV [show].

“I want you to know I had nothing to do with the costumes on this sketch. Unfortunately, education on this part of the history wasn’t done and I am also hurt by the pain this signifies for so many people.

“I’m truly sorry and I promise you that this will not happen again. Our team is talking to the TV station, working on taking down the footage, so that it does not cause any more pain.”

We apologise for any offence caused during the End of the Show Show by the costumes worn.

It comes after Ofcom received 68 complaints about the Pussycat Dolls’ performance on the launch episode of the new series a couple of weeks ago.

During the funny skit, Ant and Dec jokingly asked the singers to “tone down” their raunchy performance for their “family friendly” show after the band sparked hundreds of complaints for their routine on X Factor: Celebrity at the end of last year.

However, one viewer wrote on Twitter : “OMG disgraceful this is a family show!! And desperate old dolls running round like horses your show was turned off tonight… was looking forward to it.”

Others loved the band’s performance, however, with one tweeting: “Loved it!!! Glad this is back on our TV!!!”

Another gushed: “Ant and Dec trying to censor the @pussycatdolls , certainly enjoyed that. It was a great way to end tonight’s episode with them. Loved their performance.”