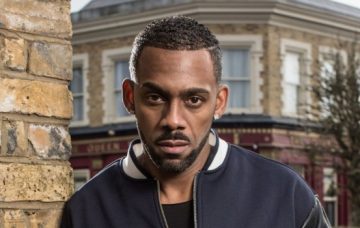 Is EastEnders’ Vincent heading into a dangerous trap? Fans think so!

It's the beginning of the end for the soap character...

Vincent Hubbard has made a dodgy deal with the police – and EastEnders fans think it will be his downfall.

In fact, after BBC viewers were introduced to a shady new Detective last night (19 April), they think likeable rogue Vincent is heading into a trap…

After getting into serious debt, the character (played by Richard Blackwood) chose the slippery path of becoming a police informant to save his family from being evicted.

In recent weeks, we’ve seen him supplying them with information about the New Year robbery he was involved in – grassing up Aidan Maguire and Phil Mitchell in the process.

Up until now, he’s been dealing with DI Franklin. But new DCI Alsworth has appeared on the scene – and soap fans smelt a rat.

The new officer insisted that Vincent would need to leave Albert Square ASAP if he wanted to keep his family safe from Phil and Aidan – sounds like sound advice, so far.

But fans think the DI is dodgy – as he appeared after Phil made a mystery phone call to an unknown person, saying: “I know I’m the last person you want to hear from but we’ve got a problem.”

Is he even a policeman?

One soap fan tweeted: “I suspect that last minute replacement ‘DI’ came from the same place as ‘Savana’ the estate agent. Vincent is about to become a resident of the same landfill housing Fatboy and Patrick’s son.”

Another tweeted: “Oh please. It is obvious this ‘policeman’ is something to do with Aidan. Vincent will get in a car and some hoodlum will turn around.”

A third agreed, writing: “This new copper isn’t a copper, he’s working for Aidan and they’ve got rid of the original one. That’s my theory.”

Vincent is being set up by a fake DI, it’s pretty blatant to me at this point #EastEnders

Aidan, that lady Savannah, now Phil Mitchell and a possible fake DI…. All these characters have made a fool out of Vincent in 2018, it’s unnecessary #EastEnders

Isn’t that new DI the same guy who turned up after the heist, the one that Ciara told that it was her van and that the robbery was staged? Vincent’s definitely walking into a trap. #eastenders

#EastEnders I suspect that last minute replacement "DI" came from the same place as "Savana" the estate Agent. Vincent is about to become a resident of the same landfill housing Fatboy and Patrick's son.

That bloke isn’t a cop he is working for Aiden and is tricking Vincent into leaving…probably to his death! #EastEnders #vincent

#Eastenders I suspect this is a big set up and the "cop" is a ringer. Vincent is being a fool.

Can this many eagle-eyed EastEnders fans be wrong?

What we DO know for sure if that Vincent leaves VERY soon in dramatic scenes – possibly even tonight.

Would you like to see the door left open for Vincent Hubbard to return? Leave us a comment on our Facebook page @EntertainmentDailyFix and let us know what you think!