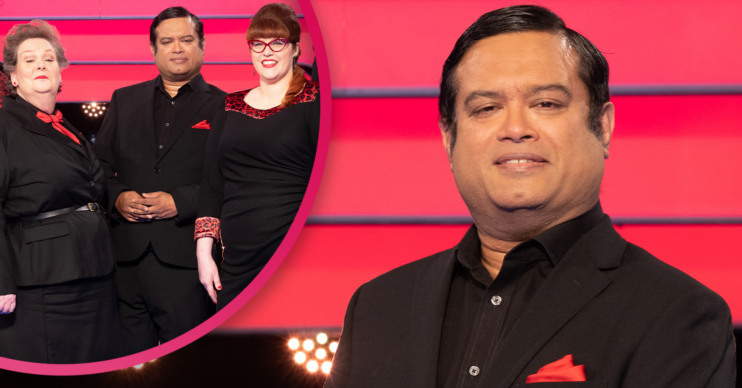 Is Beat the Chasers star Paul Sinha married? What did he do before he was famous?

Beat the Chasers returns tonight (September 11) with all six Chasers taking part for the first time ever – but what do we know about the man who is undoubtedly our favourite of the bunch, Paul “the Sinnerman” Sinha?

He’s had a long and illustrious career on The Chase, becoming the fourth quizzer to join the line-up.

When did Paul Sinha join The Chase?

Paul joined the ITV quiz show in 2011, with his first episode airing on September 8.

He was the fourth quizzer to join the show and had not one but three nicknames at the start.

Host Bradley Walsh referred to him as The Sinnerman – which stuck – The Smiling Assassin and Sarcasm in a Suit.

As well as the regular daytime episodes, Paul also takes part in celebrity specials of The Chase.

And, of course, he’ll take his seat alongside the five other Chasers in the new series of Beat the Chasers.

Why did Paul Sinha miss the last Beat the Chasers?

Paul was notably absent during the last series of Beat the Chasers.

Series three aired back in May this year, but Paul didn’t join the rest of the gang.

Paul took to Twitter to explain why he didn’t take part: “On the week of recording, I was unwell. Happens,” he said.

Read more: Want to be on Beat the Chasers? Here’s how!

The Governess Anne Hegerty also added: “He wasn’t very well, he is a lot better now and he is looking forward to getting back to work.

“He was happy to get back to work as soon as possible, but the specialist was saying, ‘No you do need a few weeks off.'”

When was Paul diagnosed with Parkinson’s?

Paul revealed he was diagnosed with the degenerative brain condition in the summer of 2019.

He revealed that while he does suffer from “bouts of tiredness”, he’s still taking part in various quizzes as “Parkinson’s can be the beginning of a journey, not the end”.

Posting on Twitter, he added: “With the diagnosis now confirmed, and a treatment plan in place, I now feel far more prepared for the new challenges ahead.”

He told the Radio Times: “I’m just quite pragmatic about it. Yes, I’m 51, and I’ve got Parkinson’s.

He also told Lorraine Kelly when he would step down from his TV quizzing role.

Back in October 2019, Paul said: “Hand on heart, if I think I’m not answering general knowledge questions as well as I used to, I will call it.”

Paul tied the knot with his long-term boyfriend Oliver Levy on December 14 2019.

He proposed to Olly in January of the same year and told his fans on Twitter.

“I proposed today. He said yes. Thus starts yet another diet,” he joked.

The married at London’s Mayfair Library and Paul previously admitted Olly is a quizzer, too.

He told GuysLikeU in November 2017: “I have a boyfriend called Oliver and we are the power couple in the world of quizzing.”

What did Paul Sinha do before finding fame as a Chaser?

Paul actually qualified as a GP during the 1990s.

However, it was during his time at medical school that he developed a love of stand-up comedy.

As a result, while working as a junior doctor in hospitals in London and Kings Lynn, he also performed stand-up routines.

What’s next for Paul Sinha after Beat the Chasers?

As well as Beat the Chasers and The Chase, Paul also has his very own quiz show.

As a result, a second series was commissioned by ITV and it’ll run early next year.

Beat the Chasers starts tonight (September 11) on ITV at 8.30pm.