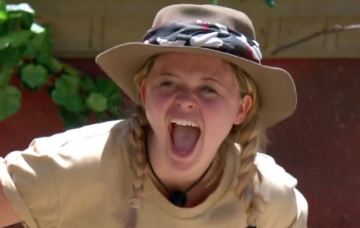 Emily Atack threatened to do a poo on Noel Edmonds’ carpet in revenge for him throwing his weight around.

The I’m A Celebrity campmate had clearly had enough with the TV presenter as she carried out his latest order to take his bags to his luxury living quarters.

Noel has been appointed Emperor and the celebs have to obey his every word.

But in a clip on ITV2 spin-off show Extra Camp, Inbetweeners star Emily suggested her vile plan to John Barrowman.

The Doctor Who actor has clashed with Noel ever since he entered the jungle as a latecomer and started ordering people around.

In the footage, Noel enters the camp carrying two heavy bags and announces: “Can anyone see anything wrong with this scenario?”

Emily immediately jumps off her seat to help, along with John, and the pair take his bags up to his bedroom.

But when they get there, the actress whispers: “Shall we just take a [bleep] on the carpet?”

John laughs, adding: “Look at the flies,” to which Emily replies: “Good.”

On Thursday night’s episode, John fumed in the Bush Telegraph after Noel told him off for scratching his groin while talking to him.

The actor insisted he was merely scratching his waist and said the veteran TV host’s jokes had not gone down well with him.

* I’m A Celebrity… Get Me Out Of Here! is on nightly on ITV followed by Extra Camp on ITV2.

Is Noel behaving unreasonably or just acting his part? Leave us a comment on our Facebook page @EntertainmentDailyFix and let us know what you think!