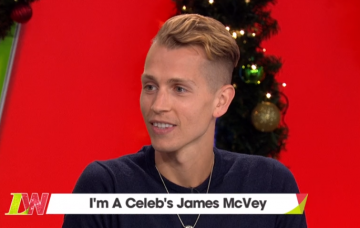 I’m A Celebrity… Get Me Out Of Here! star James McVey has said he will propose to his partner after being inspired by fellow campmate Harry Redknapp.

The Vamps star also said that former football manager Harry, who won the series, is helping him to choose an engagement ring for his girlfriend Kirstie Brittain.

“It’s very easy for us all to think it doesn’t exist. But it really does. They met when they were 17, courted for four years, then got married.

“They’re definitely the example that’s made me realise Kirstie and I are very happy with what we’ve got and we want to, kind of, do it really. He’s given me the inspiration to take the next step.”

The 25-year-old guitarist said he has not yet proposed to his partner of four years – a model and student at University College London – but that it will happen “soon”.

Referring to rumours they had already become engaged, he said: “It’s funny actually, she had a ring with her, not the ring, (but she) had a ring and wore it on that finger without thinking anything of it.

“When we were papped leaving the hotel everyone thought we’d got engaged.”

He said Redknapp, 71, has recommended a jeweller for the engagement ring, and added: “I grew up in Dorset, where he lives, so we have so many mutual friends and places and he’s picked me a place to go.

James, who rose to fame as one quarter of pop-rock group The Vamps five years ago, also said he did not take part in the jungle series to boost his profile for a solo career.

He said: “I wanted to do it. I’m very happy with my position in The Vamps – I don’t want to go solo or anything like that – I wanted to test myself as a person.

“I struggle a lot in social situations with people I don’t know.

“I thought the best way to do it would be to take away absolutely everything and focus on being comfortable with myself.”