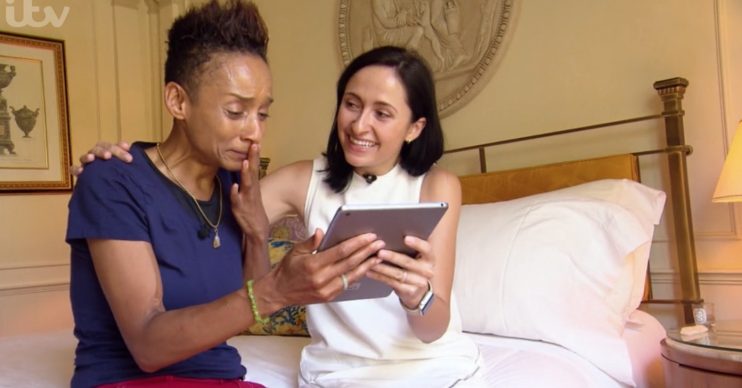 Jane carries a picture of Adele with her, too

Adele Roberts was the first campmate to voted off I’m A Celebrity.

But in last night’s I’m A Celebrity… Get Me Out Of Here! Coming Out (12.12.19), the BBC Radio 1 DJ broke down in tears after she discovered that Jane McDonald had recorded a video message for her.

Wouldn't it be fantastic if somehow this video was smuggled into the jungle for Adele to watch… @AdeleRoberts @imacelebrity #teamadele #imaceleb pic.twitter.com/Ch8THTtOu4

Adele, 40, was reunited in the show with girlfriend Kate, who showed her the video message from Jane.

In it, the singer said: “I would just like to wish Adele all the best in the jungle.”

Then, holding up a framed picture of Adele, she said:  “You see, I carry a picture of you at all times, my darling.”

Oh thank you Jane, I’m buzzing, that’s the best thing ever, who needs the crown, I’ve got Jane!

“Oh thank you Jane, I’m buzzing, that’s the best thing ever, who needs the crown, I’ve got Jane!”

During the series, Adele revealed that her luxury item was a framed photo of Jane McDonald.

Campmates were allowed to choose one item each and couldn’t double up.

With a family photo and pillows already taken by other campmates, she chose something that made her happy – a photo of Jane, whose records she regularly played on her radio show.

The photo caused a spat with fellow campmate Roman Kemp.

The incident also caused a sensation on the internet, with a #janegate hashtag being created.