I’m A Celebrity… Get Me Out Of Here! has scooped a Bafta for the most recent series featuring Holly Willoughby as co-host.

Holly filled in for Ant McPartlin on the show when the presenter stepped away from his TV roles after being arrested for drink-driving.

Co-presenter Declan Donnelly said: "Thank you Holly for helping me out last year.

"You did a fantastic job standing in for Ant, who has reluctantly come up here tonight."

You did a fantastic job standing in for Ant, who has reluctantly come up here tonight.

Indeed, Ant hovered a distance away from his TV partner and coyly waved as Dec added: "He’s still part of the team as well."

He quipped "if anyone is feeling a little faint or funny see (I’m A Celebrity medic) Bob afterwards", who was also on the stage.

Ant and Dec's Britain’s Got Talent was also among the early winners at the TV Baftas.

"It was extraordinary, it was a proper experience, one I will take with me for the rest of my life.

The brilliant Fiona Shaw wins the Supporting Actress BAFTA for her role in @KillingEve 🏆🎭 #BAFTATV pic.twitter.com/Vw7JOjBdSy

Clutching the Bafta mask, she said: "All I can say is 'look, Phoebe, both hands – extraordinary'."

The role was "probably the greatest pleasure in my life", she added.

Piers Morgan's hopes of a win were dashed by Cambridge Analytica Uncovered (Channel 4), which triumphed in the news coverage category.

Good Morning Britain had two nominations, for On A Knife Edge and its Thomas Markle exclusive.

Programme-makers thanked the undercover reporter who exposed what Cambridge Analytica were up to.

"We couldn’t have done it without him – or her," they said.

"Facebook are saying they are doing what they can to protect people’s data … we still await to see if that’s the case."

The actor was unable to attend the ceremony, with the award collected on his behalf by director Stephen Frears.

The Royal Wedding: Prince Harry And Meghan Markle lost out in the live event category.

The Royal British Legion Festival Of Remembrance, also on BBC One, won the gong.

Huw Edwards, who presented the programme,  paid tribute to the "true heroes who won the award, that generation of men and women". 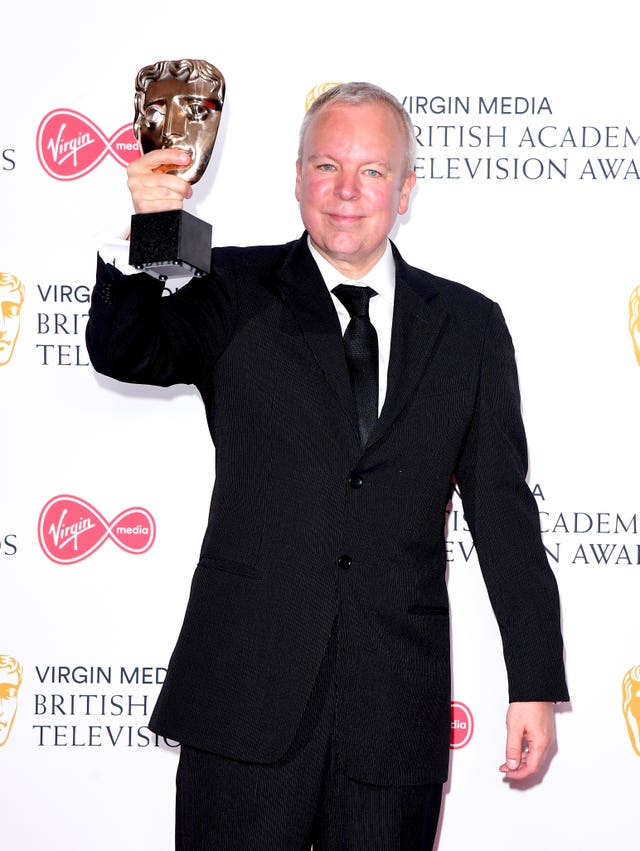 Steve Pemberton with his Bafta for best male performance in a comedy programme (Credit: Ian West/PA)

The drama was based on the true story of Jerome Rogers from south London, who took his own life at the age of 20 after accruing mounting debts sparked initially by traffic fines while working a zero-hours job.

Programme-makers criticised bailiffs, calling them “organised gangs extorting money from people who haven’t got it”.

Mr Rogers’s brother, speaking on stage, criticised the "gig economy in our nation" and the "unregulated bailiff industry" leading a "young man to take his own life before he reaches his own 21st birthday".

He added: "If one more person sees it (the show) because of tonight, it’s amazing."

The Bros documentary lost out to Suffragettes With Lucy Worsley for specialist factual programme.

The BBC One winner used dramatised testimony to tell the story of a group of working-class women conducting a dangerous campaign for the vote.

Steve Pemberton won best male performance in a comedy programme for Inside No. 9.

The actor thanked his family and his mother, who he said would be "screaming and dancing in the street".

What did you think of tonight's winners? Leave us a comment on our Facebook page @EntertainmentDailyFix and let us know.