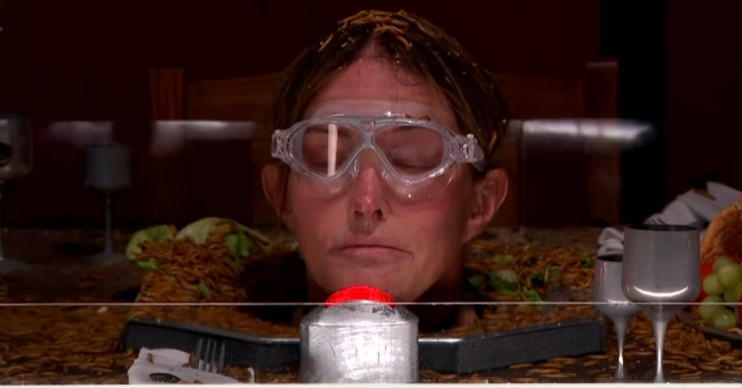 They couldn't understand why she kept losing

Viewers of I’m A Celebrity have branded one of last night’s Reckoning trials “rigged” after Caitlyn Jenner kept losing.

The American TV star, Andrew Maxwell, Kate Garraway and Andy Whyment took part in the Bad Banquet trial which saw them put their heads through a hole in a table.

They had to try and keep their chins on a red button as critters – including spiders, meal worms, cockroaches and crickets – were poured onto their heads.

If they moved their chin from the button, it would result in a fail and whoever had the least amount of fails at the end of the trial would win dinner.

The campmates who lost the task would be eating rice and beans.

I’m sorry but Caitlyn barely moved so how did her buzzer go off 4 times?

The trial saw Andrew and Andy win after Kate and Caitlyn bagged the most fails.

However, some viewers claimed Caitlyn never took her chin off the button and were baffled as to why she failed.

One person said on Twitter: “Swear @Caitlyn_Jenner’s button was rigged or broken? She looked like she wants moving at all.”

Swear @Caitlyn_Jenner button was rigged or broken? She looked like she wants moving at all… #ImACeleb

A third tweeted: “I’m sorry but Caitlyn barely moved so how did her buzzer go off 4 times?! Complete fix.”

Im sorry but Caitlyn barely moved so how did her buzzer go off 4 times?! Complete fix 🙅🏼‍♀️ #ImACeleb

However, a rep for the show told us: “It’s nonsense to suggest anything was ‘rigged.'”

The Reckoning trials were revealed by hosts Ant McPartlin and Dec Donnelly earlier this week after they announced the campmates were all ‘cursed’ and must face the tasks to free themselves.

The campmates went against each other in Sinister Circus, in which they were locked in water tanks containing snakes, crabs and eels.

They had to try and free themselves by diving underwater, memorising codes and unlocking the padlocks before ringing a bell.

Nadine and Roman won the challenge meaning Ian and Jacqueline were eating rice and beans.

Meanwhile, Cliff Parisi, Adele Roberts, Myles Stephenson and James Haskell took on the final challenge which saw them buried alive in coffins while a variety of critters joined them.

They had to wait for a key to be dropped into their coffins and quickly use it to unlock the lid and get out.