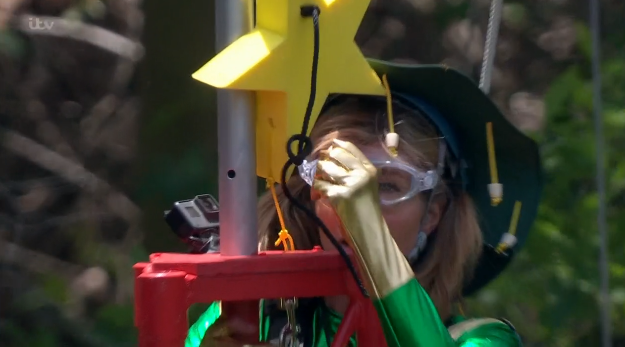 Ant made a joke out of the grumbles!

Another evening, another trial to enjoy from I’m A Celebrity but viewers are getting a little impatient.

Kate, Andy and Jacqueline took on Celebrities Assemble… 100ft in the air.

They were charged with rescuing damsel in distress Jacqueline, who was dumped in a box with loads of critters for company.

They had to collect eight stars tackling an obstacle course in the sky, before rescuing Jac.

Jac was in possession of two combination codes for a buzzer that her teammates activate to release her.

The final 9th star was in Jacqueline’s box and she had to be holding it when she was rescued to collect it.

Jacqueline screamed as she got into her box filled with her nibbly friends and was raised high up in the air.

As the klaxon sounded, Kate and Andy made their way across the first platform and started to get the first stars which had green ants around them.

“They can bite through lycra, it turns out,” said Kate.

Kate then had to throw a boomerang at a target which dropped a star that Andy had to catch.  She managed to do it and they moved along the platform.

Kate then realised she’d forgotten a star, then climbed a tower to get another.

Andy and Kate got to the final platform and Jacqueline shouted out the combination lock codes to them.

They unlocked the box and pressed the red button which then opened the bottom of Jacqueline’s box, releasing her to dangle in mid-air.

She held onto the 9th star which meant successfully completed the Trial!

Impressive! But viewers were fed up to see KNOTS taking centre stage in a trial yet again…

So who devised these trials into Scouting, Sailing or…Rope Play 😜😂 all these Knots #ImACeleb

This series of #imaceleb is just them untying a load of knots pic.twitter.com/ImCrPMo0jg

Is every trial this season undoing knots? #imaceleb

Ant McPartlin had clearly been reading all the tweets as he was quick to make a joke about there being knots all over this series after the ad break. Ha!

Are you fed-up of knots?! Leave us a comment on our Facebook page @EntertainmentDailyFix and let us know what you think of this story.