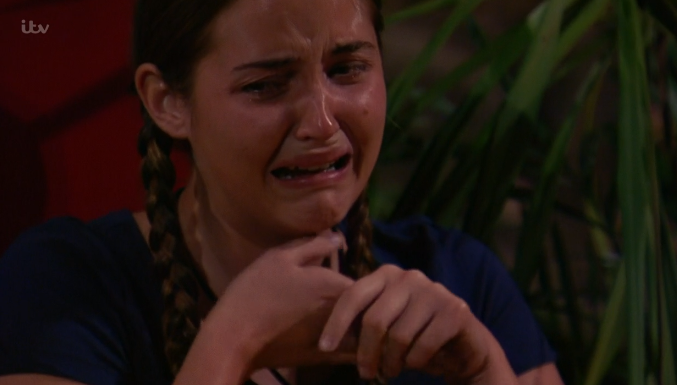 The campmates were all in tears

It’s that time of the series when the I’m A Celebrity campmates receive letters from their loved ones.

On Thursday night’s show, the celebrities had to try and win their letters using a yellow toy grab machine which held seven toys holding letters which represented each of the campmates letters from home.

They bagged all the letters and read them out to each other after dinner.

Caitlyn Jenner read out the letter Myles Stephenson’s Dad wrote, which said: “It’s your Dad here, it’s been great watching you get on with everybody and showing respect but I wouldn’t expect anything else from you.”

Read more: I’m A Celebrity fans gutted as Myles Stephenson is voted out

Crying, Myles said: “You don’t understand how much that letter means.”

Caitlyn’s letter from home was read out by Jacqueline Jossa and it said: “You are doing such an amazing job in the jungle. Show these Brits that American Olympian endurance.

In the Bush Telegraph, Caitlyn said: “I think in some ways although it’s really emotional it does lift the morale and makes you appreciate them so much more when you get out.”

Roman Kemp read out Nadine Coyle’s letter from her sister Rachel which said: “What you have accomplished so far is courageous. We are all bursting with pride!!

“We are all here in Australia supporting you every step of the way. Anaiya is having such a good time and Papa is teaching her how to swim.”

Nadine then read out Roman’s letter from his girlfriend Sophie.

Roman broke down as the letter read: “I miss you so much, it’s ridiculous. It’s made me realise just how much I love sharing the boring, everyday aspects of life with you.

“I am so excited to have those moments back. Keep doing me proud and keep being wonderful. All my love.”

Jacqueline then broke down in tears as she received a letter from her husband Dan Osborne and their daughters Ella and Mia.

The letter read: “I want to firstly say I’m so, so, so proud of you! My days just aren’t complete without you in them. I miss my wife like mad, I can’t wait to see that pretty face.

It’s made me realise just how much I love sharing the boring, everyday aspects of life with you.

“You also have two little best friends here waiting for you. Mia kisses a picture of you and Ella is always asking when is Mummy coming back from the jungle. I’m giving them extra kisses for you every day. See you real soon babe.”

In the BT, Jacqueline gushed: “That letter for me, them words, is what I needed. It’s really hard being in a jungle away from your family, away from your kids. I’ve learnt a lot about myself on this journey.”

The letters from home have left us all in bits 😢 #ImACeleb pic.twitter.com/78dijXwj61

Kate Garraway’s letter read: “We already know you are the nicest, kindest, strongest woman in the world and now the whole country knows it too.

“We are having a brilliant time with the other friends and family so don’t worry about us. But there is a hole in the bed, and in our hearts, where you belong.”

Andy Whyment had a letter from his wife Nichola, which said: “First of all don’t cry. Hollie was so upset when you didn’t get your roast dinner and your snoring keeping Caitlyn Jenner awake was just too funny.

“The kids are missing you so much, Tom keeps saying ‘it’s just not right because Dad isn’t here’! All I can say is that I am so proud to be your wife – you are 1 in a million.

“Just carry on being yourself, we love you so so so so much and are all so proud of you.”

Viewers were sobbing watching the campmates receive their letters.

Another year, another night of crying at #ImACeleb letters from home 😭😭

Get the tissues ready! Loved seeing all of the celebs getting their letters from home #ImACeleb