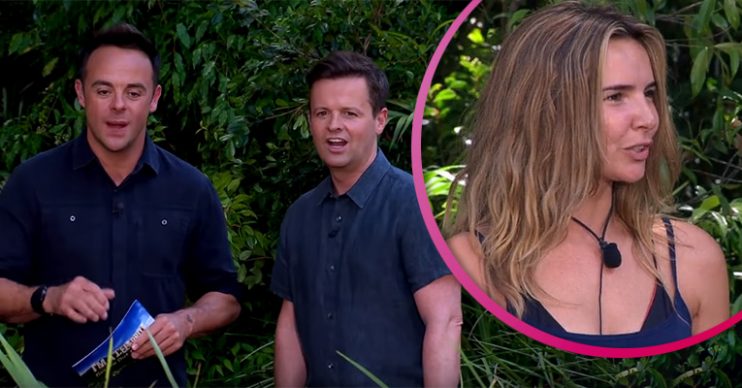 She also admitted she fancies the presenter!

Viewers of I’m A Celebrity were amused when Nadine Coyle ‘flirted’ with Dec Donnelly in the Bushtucker trial.

Nadine took on Movile Home last night and had to retrieve stars from inside an abandoned mobile home.

She had to first climb into the front of the truck and untie two stars from pieces of string before unscrewing them and putting them into her bag.

Read more: Ant McPartlin hits back at I’m A Celebrity viewer’s claim they’ve ‘got it in’ for Ian Wright

She was covered in green slime, meal worms and cockroaches as they tried to get the stars.

Dec told her: “I can see the look in your eyes,” to which Nadine replied: “They’re full of admiration for you.”

Nadine then clambered into the back of the truck to dig out more stars and this time, she was covered in offal, fish guts and green ants.

The last task saw the Irish pop star jump onto a bed with 20 crabs to bag the final two stars.

Later in the show, Nadine admitted she fancied Dec as Jacqueline Jossa said she has a thing for Ant McPartlin.

Nadine said: “Dec said today, ‘so Nadine get on the bed’ and I was like, ‘oh my God, Dec! Never thought I’d hear you say that,'” as the campmates laughed.

Dec, I never thought I’d hear you say that.

Roman Kemp asked: “You’re blushing over Dec? Is he your favourite?”

Nadine replied: “Yeah, [Jacqueline and I] decided that the other day. We picked one each.”

Jacqueline said: “I didn’t actually realise they were good-looking. We said, ‘what one would you have?’ and she said Dec and I said Ant at the same time. We don’t have to fall out!

Gushing over Dec, Nadine said: “I just think he seems really cheeky like there’s something cute and cheeky about him. He’s quite sassy.”

Speaking in the Bush Telegraph, Jacqueline said: “Ant and Dec, they’re a bit of alright actually. I think they’re funny, they smell good and as they get older, they look even better. I don’t know if they’re having work done but they’re getting better looking.”

As the camera cut to the studio, Ant and Dec were seen striking poses as Dec said: “What is it about this show tonight? That’s the second time we’ve seen older women lusting after hunky young men.

“I’ve said it before and I’ll say it again, we’re not just pieces of meat guys,” to which Ant added: “Stop ogling us!”

Viewers were amused by Nadine’s comments towards Dec in the trial.

Dec: Get up onto the bed Nadine.

Nadine: I never thought you would say that to me. 😝😂 #ImACeleb