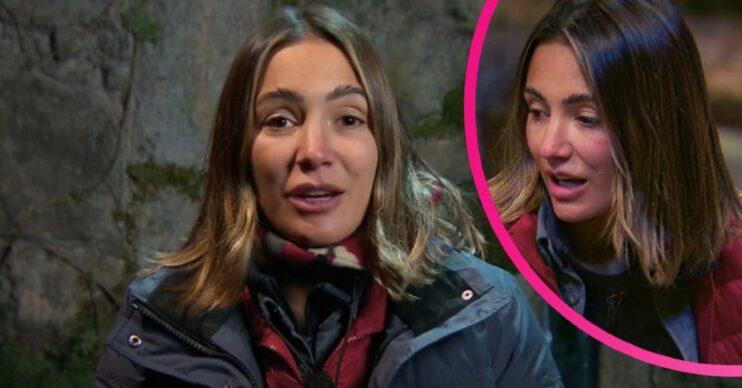 Frankie is the only remaining woman in camp

The Saturdays star has become a firm favourite on the ITV programme.

However, some fans were left unimpressed with the amount of airtime Frankie received during Friday’s episode.

During the show, Frankie went on to speak about an awkward encounter involving her husband Wayne and her sister.

Meanwhile, later on in the episode, Frankie bravely opened up about her struggles with anxiety and depression.

Read more: Sister of Frankie Bridge reveals her ‘secret signals’ to family on I’m A Celebrity

At the time, she was sitting at the fire with Olympic diver Matty Lee.

Frankie shared: “I’ve always had depression and anxiety and I just had a breakdown when I was about 21, I think I was. I’d been through a really bad break-up, that was really public and everyone was really horrible.

“I was with Wayne, I was able to function at work, but then I’d come home and I couldn’t function. Just cry all the time. I didn’t want to be alive anymore, basically.”

In the Bush Telegraph she later added: “I know it can be a bit shocking for other people to hear that I was hospitalised at 21.

“I think people often think that that kind of thing only happens to older people. So I don’t mind talking about it and Matty seemed genuinely interested.”

However, Frankie’s appearance in camp divided viewers at home.

How did I’m A Celebrity viewers respond?

Many viewers were annoyed over how much screen time Frankie received.

Taking to Twitter, one complained: “Why are they only showing Frankie – it’s turning into the Frankie show! SO annoying #ImACeleb.”

A second added: “Welcome to the ‘Frankie show’. Wouldn’t surprise me if she does win, the way the show is being edited around her #ImACeleb #ImACelebrity.”

Another fumed: “Getting sick of ‘The Frankie Show’ #ImACeleb.”

Getting sick of "The Frankie Show" #ImACeleb

Welcome to the 'Frankie show' 🙄🙄Wouldn't surprise me if she does win, the way the show is being edited around her 🙄 #ImACeleb #ImACelebrity 🕷️🪳🐀🐍

This episode seems to be the David and frankie show #ImACeleb

A fifth shared: “I honestly don’t get why Frankie is still in there she hasn’t done much #ImACeleb.”

A sixth tweeted: “This episode seems to be the David [Ginola] and Frankie show #ImACeleb.”

Why are they only showing Frankie?!

Meanwhile, others praised Frankie for openly discussing her mental health.

One said: “Love Frankie now. So much love for her since she addressed her own mental health. A massive subject which is still taboo to many #ImACeleb.”

A second wrote: “This episode is seriously highlighting how opening up about your mental health is so important, from Frankie’s suicidal thoughts to David’s heart attack and needing to speak. If you need to talk to someone, people and helplines are available.”