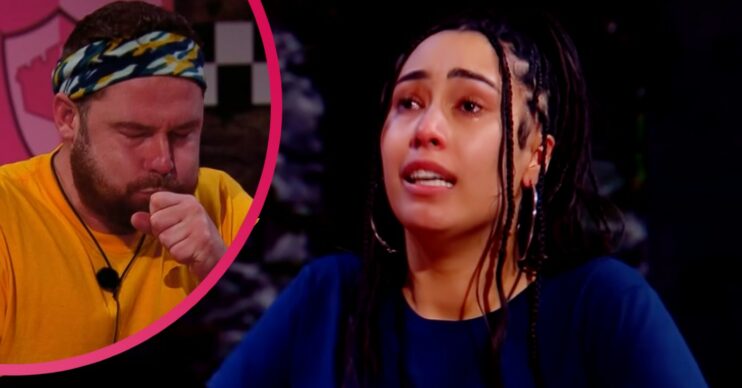 The pair took part in the Castle's Dreaded Diner

However, fans of the show were far from impressed as Danny took home the prize for camp.

The public voted for Danny to do the trial during last night’s show.

Meanwhile, Snoochie volunteered to do the trial alongside the Emmerdale star.

The radio host said: “I’m dreading most potentially not getting any stars and having to come back to the Castle and say to everyone, ‘Sorry guys…’

And Danny appeared just as nervous.

He said: “This is literally going to be hell on earth.

“I’m going to do it and make my son proud of me. That’s literally my thought process right now.”

During the trial, the pair ate a series of disgusting delicacies.

But as the trial ended in a tie, the pair had to down a Van Hella milkshake.

Danny and Snoochie both downed their drinks and Danny won.

However, viewers at home appeared unimpressed with the result.

snoochi’s been robbed there – literally had to eat the most and he was throwing it all up straight away, what a scam #ImACeleb

Is there no penalty for vomiting during the eating trials now? The Snooch was robbed. #ImACeleb

Snoochie was robbed of that win #imaceleb

😭 Noooo she won too. Got robbed. #ImACeleb

How did viewers respond to the trial?

Many believed that Snoochie deserved to win as Danny threw up throughout the trial.

On Twitter, one said: “Snoochie was robbed of that win #ImACeleb.”

In addition, a third wrote: “Nah, @snoochieshy was robbed! Danny brought most of it back! #ImACeleb.”

Another complained: “She ate more and kept it down, plus was smiling throughout #ImACeleb.”

Furthermore, a fifth shared: “Snoochie’s been robbed there – literally had to eat the most and he was throwing it all up straight away, what a scam #ImACeleb.”

A sixth commented: “Is there no penalty for vomiting during the eating trials now?”

Meanwhile, others believed that Snoochie was given harder meals.

One tweeted: “Snoochie clearly got the harder meals #ImACeleb.”

Snoochie is also taking part in tomorrow night’s trial after being voted for by the public.

To find out more tune into I’m A Celebrity…Get Me Out Of Here! tomorrow at 9pm on ITV.