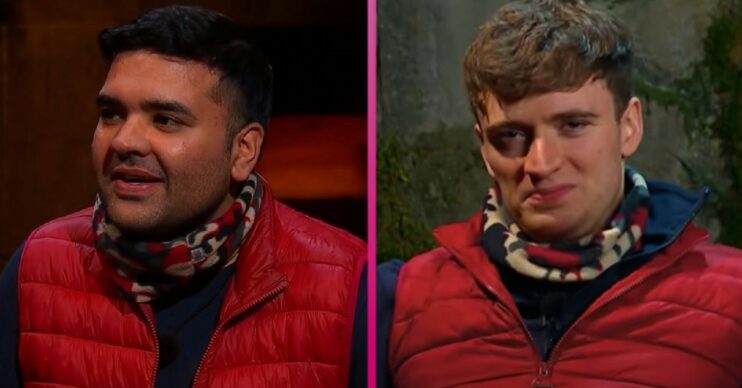 Naughty Boy became the fourth campmate to be evicted

On Wednesday, viewers saw music producer Naughty Boy become the fourth celebrity to leave the I’m A Celebrity camp – the first male star to be eliminated.

Should Naughty Boy have been evicted from I’m A Celebrity?

But, fans of the show took to Twitter in outrage over his eviction, and many believe Olympic gold medalist Matty Lee should have waved farewell to the camp instead.

Matty Lee on I’m A Celebrity

One wrote: ” Love or hate Naughty Boy, but he deserved to stay longer than Matty at least #ImACeleb.”

Meanwhile, a second said: “#ImACeleb can’t believe @NaughtyBoyMusic was voted out he was good in there, why is Matty still in there?? He’s so dull. So boring he is.”

After that, a third wrote: “So you’re telling me Matty ‘Sporty Boy’ Lee got more votes than Naughty Boy (and Adam [Woodyatt])?

“How? It shouldn’t be him tonight. Who are these plonkers voting for the wrong people? #ImACeleb.”

Another wrote: “[Naughty Boy] should of stayed in there longer funny and entertaining guy, unlike some of the others such as Matty and Louise [Minchin], boring sods.”

One added: “Should be Matty.”

Love him or loathe him, Naughty Boy certainly kept viewers entertained during his time in Gwrych Castle.

He built up a close friendship with choreographer Arlene Phillips and said they’ll be “friends for life”.

He also took part in a whopping seven trials and won an impressive 52 stars for his campmates.

Read more: Naughty Boy is planning surprise reunion with his mum after I’m A Celebrity exit

Naughty, whose real name is Shahid Khan, revealed on Lorraine this morning (December 9) that he’s planning a surprise reunion with his beloved mum Zahida who is living with dementia.

Who would you like to win I’m A Celebrity 2021? Leave us a comment on our Facebook page @EntertainmentDailyFix and let us know what you think of this story.