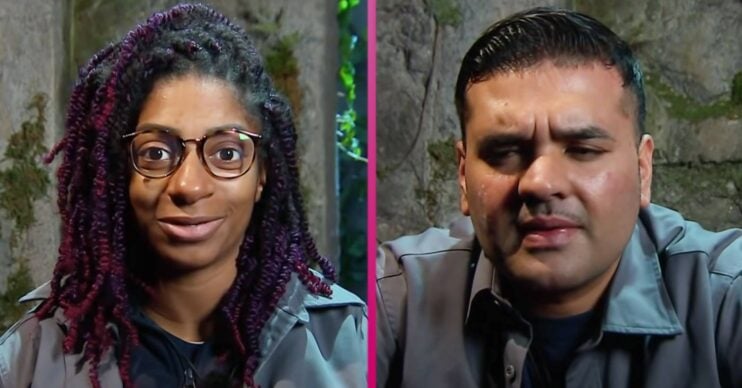 Shocked he wasn't more sensitive about Paralympian being tired

I’m A Celebrity viewers are siding with Kadeena Cox following the latest clash between her and Naughty Boy.

Fans on Twitter have dismissed the music producer as “patronising” and “rude” for how he behaved towards the Paralympian.

But while many of those watching at home seemed displeased with Naughty Boy, it seems Kadeena may have already forgiven him for the row.

What happened on I’m A Celebrity between Kadeena Cox and Naughty Boy?

Food was once again at the centre of their sharp words. This time the pair rubbed up against one another over rice supplies and how much rice had already been cooked.

Kadeena, 30, admitted to fellow I’m A Celebrity contestants she was already feeling on edge before her tense words with Naughty Boy.

Having been out of the camp all day, Kadeena revealed she was already weary before coming back and cooking for everyone else.

Read more: I’m A Celebrity viewers all saying the same thing as Kadeena gives up phone call home for Louise

And it seems Naughty Boy’s repeated questions about rice wore Kadeena down even more.

And after she complained about explaining the situation again and again, Naughty Boy snapped back.

He said: “The reason you’re having to repeat yourself is because I’m trying to understand what’s going on.

“You don’t need to get [blank] with me, you really are. I’m speaking to you respectfully.”

How Kadeena and Naughty Boy reacted

An exasperated Kadeena curled up in her hammock, appearing upset.

Naughty Boy, meanwhile, related his frustration in the Castle Telegraph.

I get it she might be tired but just being rude… there’s no need for it.

He noted he understood how Kadeena lives with multiple sclerosis, but still felt he had been wronged.

Kadeena and Naughty Boy later seemed to make up, in a fashion, with her suggesting she wanted them to respect how the other feels.

But many of those watching at home were seriously unimpressed with Naughty Boy’s demeanour throughout the spat.

naughty boy getting pissy at kadeena for being tired when she literally has ms #ImACeleb pic.twitter.com/C9u6GIT9kN

Another Twitter user asked: “Why does Naughty Boy always make himself the victim?

“Kadeena was trying to explain herself and he wasn’t listening. She’s absolutely shattered & needs to rest because of her MS. He could have helped her more.”

And someone else fumed: “If Naughty Boy thinks Kadeena is being rude he better brace himself before he checks Twitter when he gets out.”

Others accused the music producer of “gaslighting” Kadeena.

One claimed: “Sorry but Naughty Boy is a manipulative, gaslighting [bleep]… I’m not about his vibe WHATSOEVER.”

Another added: “Gaslighting Kadeena earlier too [bleep]ed me off. Causes arguments left right & centre that one.”

A third said: “I thought he was gaslighting Kadeena too – even when they had their ‘make-up’ chat.”

I’m A Celebrity continues tonight, December 5, on ITV at 9pm.