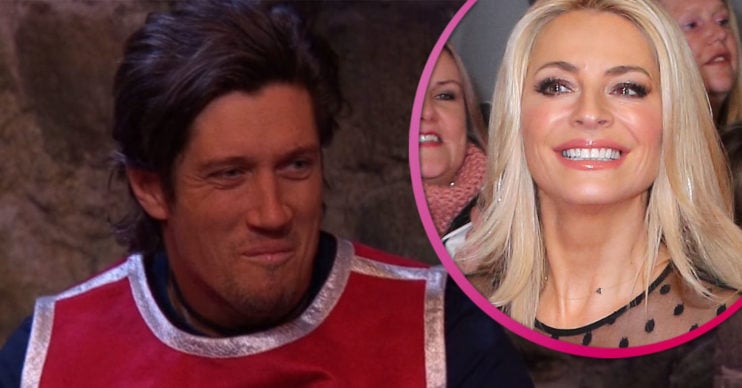 Tess said her daughters were thrilled by his message

I’m A Celebrity star Vernon Kay has secret signals he gives in the castle, says his wife Tess Daly.

During last night’s live Bushtucker trial, Vernon waved at the camera to his daughters Phoebe and Amber.

Tess shared a clip of Vernon waving to her Instagram account and revealed his secret signal for her.

Meanwhile, replying to a fan comment, she added: “Ant [McPartlin] had to move him on for the next live trial. He touches his left ear as a signal for me.

“I’m delighted for the girls were made up!”

In another message to a fan, Tess said: “He’s saying, ‘HI AMBER HI PHOEBE’ to the girls!

He touches his left ear as a signal for me.

“They were so happy because it was the first time they were watching together it’s been a bit late for AMBER but it’s Friday night so she was allowed up!

Meanwhile, last night, Vernon left viewers in hysterics when he appeared to drop the f-bomb live on air.

What did Vernon Kay say on I’m A Celebrity?

The presenter went against Victoria Derbyshire as they were put into a coffin filled with creepy crawlies.

The pair had to unthread coins for their teams.

However, as the bugs dropped onto him, Vernon shouted and appeared to swear.

One viewer said on Twitter: “Did Vernon just swear???”

Another wrote: “Wait did Vernon just swear then?”

One added: “Any and Dec: ‘this is a live trial, which means please watch your language everyone.’