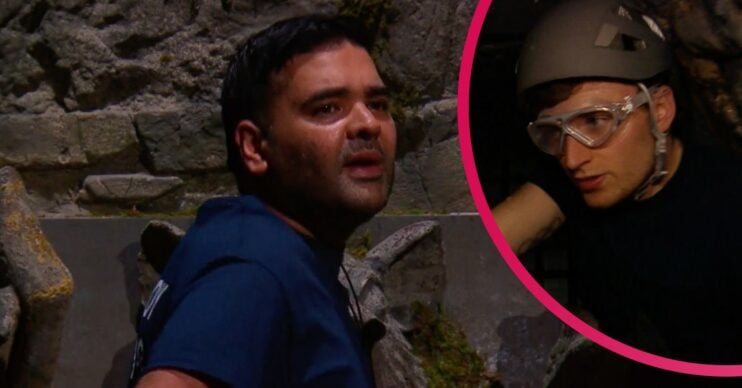 This looks like it's going to be a good one!

It looks to be another disgusting episode of I’m A Celebrity tonight, as a new preview clip shows Matty Lee covered in critters in a vile trial!

Naughty Boy can be seen squealing as the Olympic gold medallist has bugs crawling all over him!

In a short preview clip released by ITV, Matty Lee and Naughty Boy can be seen taking part in a challenge. The challenge in question is the horrible-sounding ‘Gruesome Gargoyles’.

In the clip, Matty is sitting in a stone tunnel undergound. He wrestles with a rope that has a gold star attached to it.

Read more: I’m A Celebrity: Frankie Bridge fans concerned for her during trial

Matty manages to untie the knot in the rope and get the star but is rewarded with a shower of bugs landing on him.

“I’ve got the second star!” the Olympic diver declares, just as the bugs land on his head.

Above ground, a nervous-looking Naughty Boy has his arm jammed in a gargoyle’s mouth. Ant and Dec then hurry the record producer along, telling him to put his arm in the next gargoyle along’s mouth.

The star looks pretty unhappy about it and goes to protest. But it seems that Matty’s words of encouragement work and he puts his arm into the mouth of the stone beast.

Naughty Boy squeals and moans as his arm enters the statue’s mouth.

This is the third challenge Naughty Boy has had to take part in on I’m A Celebrity this week.

On Wednesday night, the record producer was strapped lying down in a contraption that was filled with rats, snakes, scorpions, and other Gwrych Castle nasties.

Along with fellow campmates Simon Gregson and Adam Woodyatt, who also took part in the trial, Naughty Boy walked away with 11 stars.

Read more: I’m A Celebrity fans beg for ‘autotune’ as Frankie and Naughty sing for their supper

On Thursday night, the musician had to sing for his dinner with Loose Women star Frankie Bridge. The pair were drenched in slime and gunk and had to sing along to a number of hit songs. They also had to finish disgusting drinks, including a glass of blended deer testicles.

The pair walked away with 10 out of 11 stars on that occasion.

Fans of Naughty Boy have called for the public to stop voting for the star, claiming it’s “bullying”. It doesn’t seem as though the public is listening though!

Are you looking forward to Naughty Boy and Matty’s trial tonight?  Leave us a comment on our Facebook page @EntertainmentDailyFix and let us know.