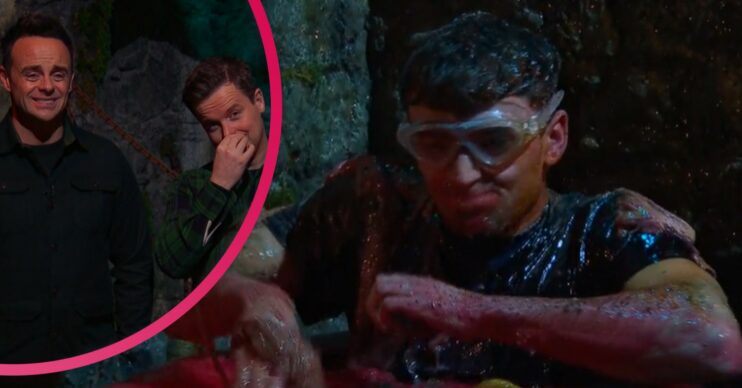 On I’m A Celebrity tonight, Matty Lee faces a vile trial as he’s covered in slime and offal.

The Olympic diver, 23, will try and win meals for camp in tonight’s Lethal Latrines trial.

In a preview clip released by ITV, Matty sits in a bath tub before it begins filling up.

What happens on I’m A Celebrity tonight?

In the clip, Matty sits in the tub as host Ant says: “You have to stay in until we say ‘bath time is over.'”

The bath then begins filling up with offal and red slime as Matty squeals and looks away.

Dec says: “Definitely something wrong with the plumbing. That is not right.”

What else happens in the I’m A Celebrity trial with Matty Lee?

Matty gags and squeals, seemingly horrified by the smell.

Ant says: “Stay in there. In there with you is offal and slime.”

However, within seconds, more offal and slime is dumped onto Matty’s head as Dec looks shocked.

Matty feels around but replies: “No…” before another lot of slime is dumped on his head.

Will Matty be able to find the stars to feed his campmates?

It comes after viewers complained about Matty’s lack of airtime in the series.

One person said on Twitter: “Pleaseeee keep Matty in #ImACeleb because I think he needs more airtime and I reckon we will all love him.”

Another wrote: “Has Matty had any airtime at all? Actually looking forward to seeing him do a trial because I don’t think we’ve ever seen him.”

A third added during one episode earlier this month: “Matty hardly gets any airtime on @imacelebrity. He’s hardly featured tonight!”