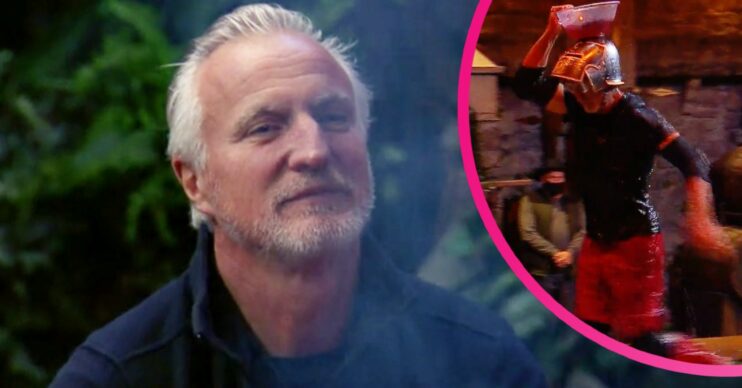 I’m A Celebrity tonight: David Ginola smashes through trial as he finally does challenge after complaints

Will the footballer bag enough stars for camp?

The retired footballer is joined by Emmerdale star Danny Miller for the show’s latest challenge, Drawbridge Over Troubled Water.

But despite taking part in barely any trials this series, David appears to be a pro at the challenge.

During tonight’s programme, David and Danny are tasked with a difficult assault course.

In a preview clip, David is seen wearing a helmet with a clear plastic bowl attached to it at the top.

The footballer attempts to make his way over a moving walkway without dropping the contents from the bowl.

However, obstacles are thrown in his direction.

The star is pelted with fast-moving giant logs, while the floor underneath him moves.

Shouting from the side, Danny says: “Here we go David! You’ve got this.”

The preview clip ends in slow motion as David throws the liquid from the bowl on to the wall.

Meanwhile, the trial marks the star’s second in the series after taking on a previous challenge with Naughty Boy and Adam Woodyatt.

It comes after viewers complained over David not taking part in the trial last night.

According to some, the former footballer “chickened” out of doing the challenge.

Instead, Danny and Simon Gregson took on Santa’s Grotty Grotto.

On Twitter, one viewer said: “As much as I love our David, I think it’s time he stopped chickening out of the trials! Come on, David!! I still vote for you, but step it up! #ImACeleb.”

Another added: ” Have gone off David! Why isn’t he doing any trials?”

Read more: I’m A Celebrity fans divided as Naughty Boy is voted out

In addition, a third wrote: “Controversial but David has barely done anything. You’d think a hero sports player would want to do a trial and win some food for the camp #ImACeleb.”

But what will the critics make of his trial tonight?

I’m A Celebrity…Get Me Out Of Here! Thursday 9 December at 9pm on ITV and ITV Hub