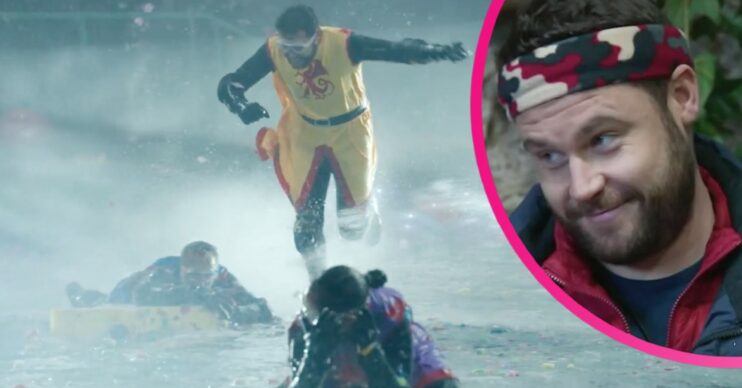 The trial is back!

I’m A Celebrity viewers are in for a treat as the highly-anticipated Celebrity Cyclone returns tonight (December 11).

The challenging trial has become a firm favourite with fans of the ITV programme over the years.

In a preview clip for tonight’s show, Danny is seen battling wind and water before lying face down on the star.

The former Emmerdale star is the final contestant to place his star on the spot.

Meanwhile, Simon, Frankie and David cheer him on in the background.

However, the stars are then washed away by a giant wave.

Frankie is heard yelping as she lands in a pool of water at the bottom of the course.

But will they be able to make it back to their spots on time?

The host, who previously took part in the show’s Aussie version, broke the news as she spoke to former campmate Roman Kemp.

Discussing the trial with the radio host, Kate said: “Although we did get to do the Cyclone didn’t we? But not in a storm.

“I managed to last long enough to do the Cyclone, which everyone wants to do. And it is going ahead in the cold and wet, isn’t it.”

Roman replied: “I know, but Kate you were just happy because wanted to see me in spandex, that was the only reason.”

“I was very, very excited about that,” Kate replied.

It comes after reports suggested that the trial would not be able to take place due to Storm Arwen and the subsequent Storm Barra.

I’m A Celebrity…Get Me Out Of Here! Saturday 11 December at 9pm on ITV and ITV Hub