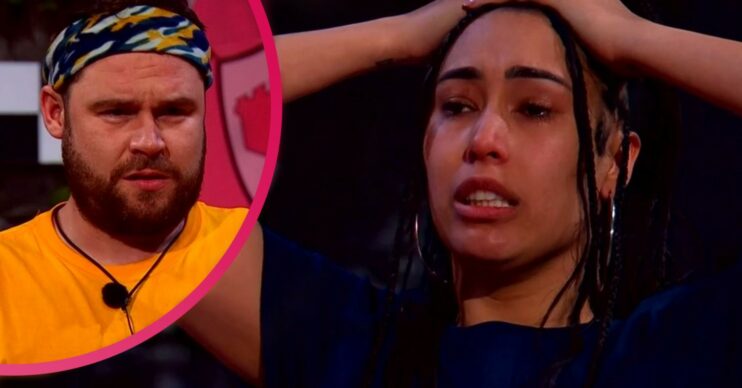 Don't have your dinner watching this!

I’m A Celebrity continues tonight and viewers will see Danny Miller and Snoochie Shy take on an eating trial.

The pair will face The Castle’s Dreaded Diner on Monday night’s programme (November 22) and it already looks disgusting.

In a preview clip released by ITV, radio presenter Snoochie is seen jumping out of her seat and squealing as she’s faced with a cow’s nose!

Danny and Snoochie sit at a table as hosts Ant and Dec watch on.

As Snoochie lifts the lid on a box, she jumps out of her seat and screams.

Snoochie says: “I’m actually crying. What is that?!”

Ant tells Snoochie: “Take the bun off and I’ll tell you.”

Snooochie lifts the bun off to reveal the cow’s nose.

What else happens during the trial?

After that, Ant adds: “Now you’ve got to eat the bit on the cocktail stick.”

Dec tells viewers: “If you’ve just tuned in, I’d suggest you turn back over again.”

But will she be able to eat the cow’s nose?!

Meanwhile, during last night’s show, Danny didn’t look happy as he was chosen by the public to face Dreaded Diner.

He told his campmates: “They said diner. It’s going to be eating something.”

Read more: I’m A Celebrity: Danny Miller will get picked for every trial, viewers predict

Meanwhile, it came very shortly after viewers predicted Danny would be picked for every trial after he was almost sick during a helicopter ride.

During the ride, Danny told some of his campmates: “I’ve swallowed about three mouthfuls [of sick].”

I’m A Celebrity continues on ITV and ITV Hub, tonight (November 22), at 9pm.

Do you think Danny and Snoochie will complete the trial? Leave us a comment on our Facebook page @EntertainmentDailyFix and let us know.