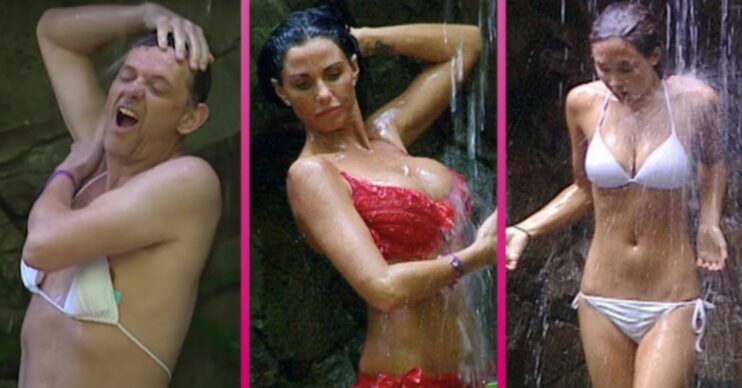 I’m A Celebrity: The most iconic shower scenes in the show’s 20-year history

I’m A Celebrity has returned to our screens and surely it won’t be long before the stars pull out their best sexy poses for those infamous shower scenes.

From Katie Price to Matthew Wright hilariously rocking Myleene Klass’ white bikini, here are some of the most iconic shower scenes in I’m A Celebrity history.

Who could forget Myleene Klass’ famous shower scene back in 2006.

The former Hear’Say beauty became part of TV history when she stepped into the shower in a skimpy white bikini.

Many have followed in her footsteps since, but have any been as iconic?

TV personality Katie Price raised pulses in her iconic bikinis during her second stint in the jungle.

Katie paraded a stunning range of bikinis in the jungle shower – and showed off her model genes as she posed up an absolute storm for the cameras.

Things got steamy when Amy Willerton and Joey Essex showered together during their series of I’m A Celebrity.

Sparks were flying between the two and love blossomed after that show.

The pair even started to date shortly after the show ended.

TV presenter Matthew Wright left us all in hysterics when he recreated Myleene’s iconic shower moment in his very own white bikini set.

The This Morning star was seen writhing around in mock-delight as he showered in the Australian jungle.

ITV knew what it were doing when they added a Vernon Kay shower scene.

The TV presenter had a laugh in the castle’s rustic shower, ignoring the grime and chilly temperatures and exposing his toned torso.

Hollyoaks star Jorgie Porter had her moment in the shower during the 2015 series.

Just like Myleene, she stunned in her white swimwear, channeling the star – and perhaps hoping to match her iconic status – in her white one-piece.

Ashley Roberts enjoys the shower on I’m A Celebrity

Showing off her lithe dancer’s body, Ashley posed up a storm in her sultry waterfall shower.

It’s not all about the ladies.

None of us could take our eyes off boxer David Haye’s washboard abs when he enjoyed his waterfall moment.

Vicky Pattison and Ferne McCann’s friendship was one of the best things to come out of I’m A Celebrity.

Read more: Where are all the previous I’m A Celeb winners now

The two pals had the best time larking in the shower together in their matching neon bikinis and showed that it isn’t all about striking the best pose for the viewer (and papers) back home.

Viewers were left swooning when Mark Wright hopped in the shower.

The one-time TOWIE star clearly had time to practice his model-esque poses beforehand.

Regardless, wife Michelle Keegan is one lucky woman!

TOWIE icon Gemma Collins was the first to brave the outback jail shower back in 2014.

Naturally, Gemma being Gemma, she wasn’t happy with her experience and squealed the whole way through.